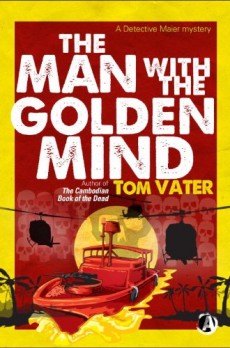 The Man with the Golden Mind

Hamburg detective Maier is hired by a beautiful woman to investigate the death of her father in Laos 25 years ago.

Maier is a detective based in Hamburg who is familiar with south east Asia, so in 2001 when Julia Rendel wants to find out the circumstances of her father’s death in Laos in 1976, Maier is the obvious choice. That Julia is beautiful and finds Maier attractive doesn’t hurt any, either.

However, the couple are still enjoying a romantic night in Hamburg when Maier is assaulted and Julia kidnapped. Maier receives an email telling him to go to Vientiane if he wants to get Julia back. He follows instructions and soon finds himself mixing with people for whom the echoes of the Vietnam War are still very real. And although the war is long over, there are plenty of dangers for Maier as it becomes clear that these people have an agenda and that he is just a pawn in the game.

This is Maier’s fourth outing, and as in previous books the author’s familiarity with south east Asia is manifest. Here the setting is Laos, a country with a lush beauty but little means of income generation other than agriculture, and still recovering from the mess that the Vietnam War brought upon it. Government rule is supposedly communist, but with limited funds officialdom is limited and struggles with a very laid-back national attitude.

In contrast, Maier’s adventures are nothing less than frenetic from the moment he enters the country. The reader already knows more than Maier himself, thanks to a three-chapter preamble dealing with events in 1976, when the Vietnam War was all but finished. A man codenamed Weltmeister, who worked for numerous governments and sees the end coming, prepares to extract himself by cynically murdering several people who can reveal his identity, including Rendel, a friend.

The reverberations of this act are still heard in various intelligence agencies, including the US, Vietnam and Laos itself. In particular there is concern about a particular file with evidence of Weltmeister’s betrayals, and details of unconscionable plans hatched by the governments concerned. The parties concerned are ruthless in their pursuit of Weltmeister and if Maier gets in the way, then too bad.

It is not always easy to believe that anyone would voluntarily expose themselves to such risks as Maier does routinely. After he takes the case Maier is exposed to pressures that help to explain why he doesn’t run away like any sensible person. Nonetheless, his continued survival seems a matter for surprise, and as with his previous outings, there is little relief from a barrage of very dark deeds and sudden grisly deaths. To mine any humour from this book you will need a very black view of the world.