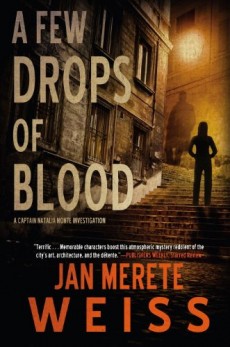 A Few Drops of Blood

Captain Natalia Monte is assigned the case of two men found murdered and posed in a private garden. Several people have a motive but the trail is cold.

Captain Natalia Monte of the Naples Carabinieri is asked to attend when the disfigured bodies of two men are found in the garden of a Countess. Both men are known to have been gay: one sexually profligate and the other a newspaper columnist with a name for tittle-tattle, and these reasons alone provide a credible motive for the murders.

But others also have reasons to seek the deaths of the men involved. Monte discovers that the grandfather of one of the dead was a fascist responsible for the death of the Countess’s father during the war, and items left at the scene suggest a revenge killing. And in a very conservative society dominated by the Camorra, a local mafia, it is possible that the deaths represent a protest by a few offended locals.

It is not uncommon to have fictional policemen torn by conflict between their professional obligations and the criminal community in which they were brought up, but seldom has the problem been so acute as that faced by Natalia Monte. In Naples the Camorra has such a penetration into society that no business or political activity is free from its exactions. Natalia is Napolitan by birth and loves the city: she understands the workings of organised crime and some of her best friends are active members. To do her job she has to reach an accommodation with it.

Whether in reality such a balancing act can be sustained for very long is perhaps moot, but the author provides a credible picture. Natalia is embraced by a social network of extended families, school friends and Naples residents that gives her an acute insight into local life. At the same time she is proud of her achievements in the police and is careful to maintain a barrier with known criminal associates, especially when a jealous Carabinieri colleague is poised to use any evidence of inappropriate connection with the Camorra to bring her down.

However, Natalia does become compromised in a sub-plot arising out of her relationship with Pino, a police subordinate who had to leave Natalia’s station when their relationship was exposed. Since the break, Pino has become involved with a girl from a crime family and her death threatens Pino with serious disciplinary action. Natalia is in position to help, but in doing so will expose herself to pressure from the Camorra.

The Naples described is a city of contrasts. In a very traditional homophobic society there seem to be many gay relationships, including that of Angelina, Natalia’s new subordinate from Sicily. The fabric of Naples is crumbling, there is a persistent stink of uncollected garbage and parks full of discarded drug paraphernalia, but Natalia and her smartly-dressed friends enjoy a pleasant life in a city described with great affection. It’s an unusual crime milieu, and all the more welcome for it.