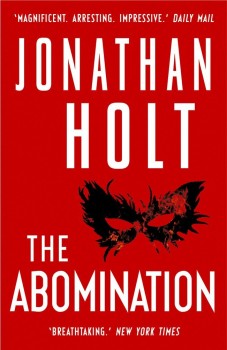 A murdered woman in priest’s robes is washed up on the steps of a Venetian church. As Capitano Katerina Tapo investigates, she is drawn into a world of international conspiracy with shocking consequences.

Capitano Katerina Tapo of the Venice Carabinieri is on her first murder case. A woman’s body has been washed up on the steps of a church during the acqua alta or winter high tide. She is dressed in the robes of a catholic priest, a grave sin in the eyes of the church.

The investigation leads Kat to Second Lieutenant Holly Boland of the US Army, now stationed at Camp Ederle near Venice. Holly grew up in Italy and is overjoyed to be stationed there again in a civilian liaison role. Holly is investigating a freedom of information request about events from the war in the former Yugoslavia and after the discovery of the body of the enquirer it becomes apparent that the two investigations are linked.

Despite Kat being told to drop the case, the two women combine forces to solve the mystery. It takes them into the Croatian countryside, into Carnivia, a social media website written as an exact facsimile of Venice, where all communications are securely encrypted, and into the darkest depths of people trafficking. They reveal a shocking plot at the highest levels and unspeakable war crimes.

This is an intelligent thriller, much more than the simple whodunit that it at first appears. It takes a while to get going, with several plot strands running independently, but it draws the reader in and once the story is properly underway the plot is Byzantine in its complexity.

The characters are sympathetically drawn, including Daniele Barbo, genius-level computer programmer and owner of Carnivia, who suffers from a variety of psychological problems following his kidnap and mutilation as a child. Many of the characters are not what they at first seem and at times it is difficult to know who to trust, as Kat and Holly seem to be under attack from all sides.

The author is clearly very familiar with Venice and Venetian food and culture and evokes the city beautifully. Kat and her boss eat out frequently and their food is lovingly described, while Holly is ecstatic at the thought of proper Italian coffee.

The Abomination is the first book in a trilogy and it promises great things for parts two and three. If the author continues to delve into Italy’s murky political past and the US army’s work during the Cold War, they will definitely be worth reading.