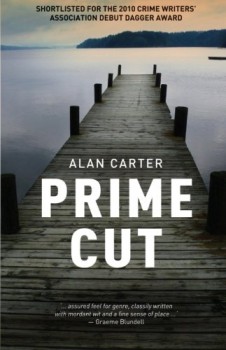 Disgraced detective Cato Kwong is called to a remote Australian mining town to investigate a body thrown up on the beach, but a much older case is reawakened by the police activity.

Philip ‘Cato’ Kwong, on the fast track for a glittering police career in Western Australia, was derailed when he was caught cooking the evidence to secure a conviction, and banished to the stock (animal) squad. However, when a torso turns up on a beach in Hopetoun, an isolated coastal town, staff shortages mean Cato has to fill the gap.

The victim appears to be one of the many immigrant workers recruited to work the mines which have brought a boom to the local economy, although lack of cooperation from employers complicates progress with the case. Police activity has also stirred up something much older, connected to a crime committed more than 30 years ago, which continues to obsess DS Miller, now retired.

Prime Cut is densely packed with characters and connections: at the beginning it can be difficult to keep track of them all, but the investment does pay dividends in the depth of the story. Cato’s ethnicity and his former fast-track status made him disliked, and his colleagues now take the opportunity of letting him know it. Even his boss, on whose behalf he took the rap, is hostile. Tess, a Hopetoun-based policewoman with whom he has to work, is an old flame who Cato abandoned abruptly, and this is another source of tension.

These unresolved conflicts are set within a gritty police procedural that finds conflict in every angle. The mine operators extract the maximum benefit from cheap foreign labour; given the opportunity the newcomers exploit each other. The local workers and those from overseas are constantly at loggerheads and brutal fights are a common occurrence. Long-term residents resent the intrusion into their quiet town but are happy to benefit from the extra cash which flows in. All this is depicted with a healthy dose of the Australian vernacular.

The two key plot lines begin quite separately and increasingly intersect as the book progresses. The book begins with a macabre double murder in 1973 Sunderland, the event which has long haunted DS Miller. The chilling nature of the crime, or crimes, as the perpetrator has gone on to repeat the offence, adds a special frisson. The thread is somewhat marred by error: Miller’s research into ancestry using mid-20th century census disregards the fact that records are frozen for a century, and even those open to inspection have to be paid for. The supposed repeated use of electro-convulsive therapy on a misbehaving child is also dubious.

The above minor issues aside, the book is compelling, and impressive for a debut. Cato is an interesting protagonist and Carter has left plenty of room to tell us more about him in the sequels already planned.