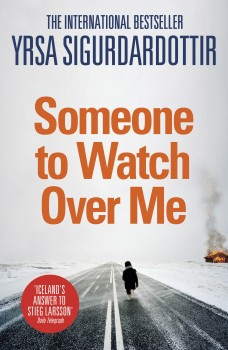 Someone To Watch OVer Me

Reykjavik lawyer Thora Gudmundsdottir is hired by a deeply unpleasant and manipulative child sex offender with a view to overturning the conviction of a fellow inmate in his secure unit. Her investigations are hampered by lies, half-truths and cover-ups.

I’m no fan of Nordic crime writing. The cold, angst, violence, trees and the fact that most of the detectives are borderline headcases themselves tends to depress me. But occasionally the genre produces a real mould breaker – and this is one of them. Yrsa Sigurdardóttir’s unusual, thoughtful and brave thriller, a combination of the achingly mundane and creepily terrifying, stands comparison with the very best of the current crop of crime writers.

Her lawyer protagonist, Thora Gudmundsdottir, is a new one on me, although this is the fifth in a series featuring an appealing heroine who manages, as do most working mums, to juggle real-life problems while remaining focussed on the job in hand. But this superbly atmospheric novel, by turns terrifying and brilliant, is also one of the most ambitious and deepest you are likely to come across and the Icelandic landscape, culture, weather and the fall-out from the country’s economic disaster give it a real sense of place without ever detracting from the plot.

The book is brave for two reasons. There is almost no action. It’s about a lawyer doing what lawyers do, assembling evidence, weighing each piece against the others, forming assumptions and testing them against the evidence – in fact, almost a procedural. But the real heart is the choice of subject – people with severe mental and physical disability, their problems and their treatment. Few authors would even dare broach such a taboo subject. Sigurdardóttir manages it with objectivity and sympathy without ever becoming sentimental or mawkish.

Gudmundsdottir is hired by a deeply unpleasant and manipulative child sex offender with a view to overturning the conviction of a fellow inmate in his secure unit. The young man with Down’s Syndrome has been convicted of burning down his care home, killing five people. Her investigations are hampered by the disabilities of some witnesses – and also by the lies, half-truths and cover-ups from those with their own interests to protect.

Sigurdardóttir’s characterisation is particularly strong. Thóra herself is a likeable and completely believable protagonist, strong and capable – brain of a lawyer, heart of a mum. As well as dealing with what at first appears an open and shut case, she must also juggle her home life as her over-extended and near bankrupt parents move into a house already full with her children, grandchild and out-of-work banker partner. Mundane tensions – her father’s whistling, her ghastly receptionist’s intransigence – provide a counterbalance to the awfulness of the crime she must investigate.

Her inquiries force her to deal with people with a variety of severe disabilities and Sigurdardóttir handles this well. Thóra’s dealings with the relatives of the victims show sensitivity, particularly when dealing with the mother of the convicted youth and her growing aversion to the sociopath who has hired her is all too real. A sub-plot concerning the hit and run killing of a young babysitter – and a possible haunting – is cut into the main story to further freeze what is an already chilling account and introduce a touch of the paranormal which hardly seems out of place in this brilliant, but brutal, tale.

It’s a hard read, not one for the crash, bang action fan, but so compelling that once you pick it up, you won’t put it down again.