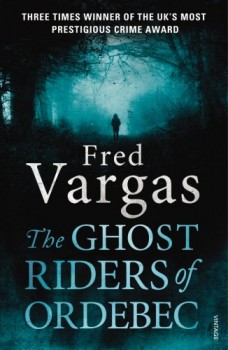 The Ghost Riders of Ordebec

Police Commissaire Adamsberg, who tackles serious crimes from his base in Paris, receives a visit from a distraught woman from Ordebec in Normandy. Her daughter has seen visions of the Ghost Riders – a medieval cavalcade – including two men currently alive. Such sightings are believed to foretell the death of such men.

Adamsberg finds it agreeable to make the visit. Firstly it is a pleasant jaunt, and secondly he has conspired in the escape and concealment of a suspect in a Paris arson who he is confident is innocent, and who can be more easily hidden out of town. However, soon after his arrival in Ordebec several lethal attacks make it evident that a murderer is on the loose, and more deaths will follow unless he gets to work.

Adamsberg is said to be unconventional, but in many ways is a familiar crime cop – on the face of it respectful and reserved but with a mind that revolves the facts until the answers he seeks come to mind. Rather more unusual are his disparate team which include a narcoleptic, an alcoholic with encyclopaedic knowledge and a bulimic woman. Their great interest in the recovery of a pigeon brought to the brink of death by string tied around its legs demonstrates their special qualities.

The difficulty with this sort of thing is that taken too far, the story is clearly not credible and is interesting only in the same way that a fairy story is interesting. Whether Adamsberg’s team would be afforded very long in a professional police organisation is moot. When a woman is attacked, a judge is pressured to give an unconventional medical practitioner a holiday from jail to offer treatment.

Perhaps most risible is Adamsberg’s connivance in the escape of the accused arsonist. As Adamsberg is assembling evidence to prove the guilt lies elsewhere, what does it matter if the accused spends some time in jail? Is it likely that a senior policeman would risk the career of himself and his team for such a pointless object? And all this is quite aside from the basic plot line itself, where a report of a medieval spectre supposedly induces a common belief that the laws of cause and effect have been suspended.

Fred Vargus has written several novels featuring Adamsberg, and has found a readership in English as well as French. As often found with French writers, the food sounds so appetising one is tempted to book a ticket immediately. The style is easy and the translation unchallenging, and those who like their detectives whimsical and kind may find Adamsberg to their taste. Despite multiple deaths, there is nothing here to give you nightmares.