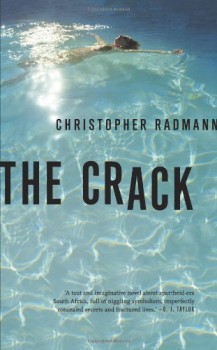 In 1976 South Africa, suspicion and fear opens up a white middle-class family like the crack in their back-garden swimming pool.

In Benoni, a white suburb of Johannesburg, lives Janet, her policeman husband Hektor-Jan, their three children (plus one more on the way), and the black staff: Alice the maid and Solomon the gardener. Life should be idyllic but Janet is uneasy – a crack has opened up in their back garden swimming pool and she hesitates to raise the matter with H-J.

H-J is also losing sleep. His skills in eliciting information from suspects in the ongoing war to sustain apartheid have earned him promotion, but the daily exercise of violence, crude and refined, is taking its toll. And at home, an oasis where H-J can restore his faith, whispers over the garden fence are giving rise to doubt. Neighbour Douglas van Deventer is hinting that Janet and Solomon are doing something unthinkable, as well as illegal in 1976 South Africa.

The narrative is carried forward by sections from Janet's perspective and from that of H-J, with occasional letters from the eldest child Shelley to her grandmother. Janet is the only child of the latter, a formidable lecturer in English, and now a victim of Alzheimer's.  Janet herself is curiously child-like, after an upbringing with this dominant but absent mother where the affection and household organisation was provided by Alice's mother. H-J is of Boer stock, of a lower social status and from a less sophisticated Afrikaner world.

For all their position within the elite white minority, neither Janet nor H-J are secure: like the ever-widening crack in the pool concrete, the gaps in what they can allow themselves to feel undermine communication and leave them vulnerable to Doug's insinuations. His suggestions to Janet about H-J and Alice are barely understood, but what he implies to H-J finds fertile ground in a mind already unbalanced by a daily routine of bestial brutality.

The failure in understanding deepens in pace with the rate of movement in the crack, which soon becomes deep enough to swallow the family. In truth, however, it is clear Janet and H-J were never on the same page. Janet seeks a bulwark against her insecurities, while H-J hopes for a refuge where a compliant wife and family will balance the ugliness of his life at work. It is not evident that the two ever understood the implicit pact that holds them together, or the falsehood of a society built upon denial of basic rights even to people who share the same house.

Radmann carefully builds up the tension, and the resolution, when it comes, is almost a relief notwithstanding its horror. This is a well-written and powerful tale which shows convincingly how corrosive apartheid can be, even to those who are its supposed beneficiaries. One might wish it was written 40 years ago, but even at this distance it drives home a moral lesson which a reader is not likely to forget quickly.