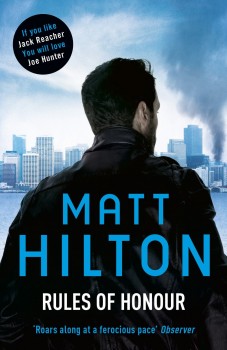 When his best friend’s father is brutally murdered, Joe will be there for him, although he doesn’t want Rink to lower himself to the same level as his father’s murderers, but it soon becomes clear that there is no simple morality they can cling to.

It seems like no time at all since I first discovered Matt Hilton’s series about ex-special forces soldier turned vigilante, Joe Hunter, and already I’ve reached book eight. This is without a doubt a series worth getting on board with and staying there for the ride. Each book can be easily read as a standalone, but through time, Hilton has deepened the characterisation of his protagonist, as well as fleshing out the supporting cast.

In Rules of Honour, the focus has shifted to the family of Jared ‘Rink’ Rington, Hunter’s closest friend, a man he would happily die for – and kill for. The book opens with the brutal murder of Rink’s father, Andrew, in an execution-style killing that leaves Rink’s elderly, frail mother, Yukiko, injured, presumed dead, no doubt the only reason the killer did not stay to finish her off.

In the immediate aftermath of the attacks on his parents, Rink is determined to mete out his own justice to gangland boss, Sean Chaney, the man he believes is responsible, but Joe Hunter isn’t so sure and does his best to rein in Rink, before he does something they’ll both regret.

Hunter is certain that Yukiko knows more about her husband’s killer than she seems willing to reveal and he’s right. When Yukiko does open up to her son’s best friend, the story she tells goes back to a shameful episode in US history after the Japanese attack on Pearl Harbour when 120,000 people of Japanese descent, more than two-thirds of them American citizens, were placed in internment camps. In one such camp, the actions of brutal camp guard, Charles Peterson, set off a chain of action and reaction that was to span two generations.

There is often a grey area in the morality of the Joe Hunter books, inevitable in any series that has at its heart the actions of a man who frequently operates outside the law, or at best on its fringes. In Rules of Honour, there is no doubt that Hunter and Rink are fairly and squarely in the role of vigilantes, acting on their own behalf, rather than – as often in previous books – at the behest of the government in the person of the shadowy Walter Hayes Conrad.

The action scenes are, as ever, immaculately described, very definitely all show, no tell and the book proceeds at rapid pace. Hilton has avoided the trap here of trying to ramp up the sheer awfulness of the bad guy – or guys – here, and in many ways the book is actually all the more chilling for that. It is easier here to find some twisted empathy with the villain, despite his actions, as there is little of black and white here, and even the shades of grey are murkier than usual.

Lovers of Joe Hunter and his friends will not be disappointed, and newcomers to the series certainly won’t be bogged down by back story. Book eight or not, this provides an excellent starting point to the dark and dangerous world of Joe Hunter.