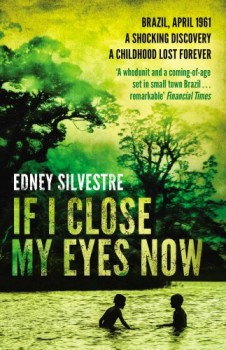 If I Close My Eyes Now

Two young Brazilian boys discover the body of a woman and enlist the help of an old man to find out who was responsible for her death.

Paulo and Ernesto, both 12 years old, are playing truant from school and cycle out of their small Brazilian town to a lake where they can swim and talk about the exciting news of Yuri Gagarin’s spaceflight. They come across the mutilated body of a young woman, Aparecita, and when the only idea of the local police is that they are the ones responsible, decide to track down the murderer themselves.

Aparecita’s husband confesses to her murder, but the boys are sceptical: while she had a reputation, her dentist husband is old and weak. They decide to search his house for clues, and in a late night entry find another intruder on the premises, who turns out to be Ubiratan, a victim of Brazilian politics now incarcerated in an old people’s home. The three combine to investigate the murder and eventually the truth is revealed, albeit at considerable cost to all three.

The story they uncover reveals much about power in Brazil in the 1950s and 1960s, a depressingly familiar story of cynical and brutal exploitation by a small coterie of families for their own benefit, with complete disregard for the abject poverty and suffering of the majority of the population.

The book makes it clear that the corruption and distortion of power and resources is not confined to national politics, but penetrates down to the local level. Ubiratan is an educated man whose life reflects this history only too well; he spent much of his young life fighting for a more equitable Brazil, and has been tortured and battered by the forces arrayed against him.

Ubiratan is no cipher, however, and emerges as an engaging character who in exposing the story of Aparecita’s abuse comes to ponder with shame his own casual exploitation of the women. Researching Aparecita’s background brings him into contact with Sister Maria Rosa, another interesting character, herself an orphan from the home where the girl grew up, and despite great intelligence and understanding is powerless to prevent the girl being taken as a plaything for local men of substance.

The portraits of Paulo and Ernesto are also convincingly drawn; both emerge as distinct personalities. Ernesto, true to his name, is hard-working and thoughtful. Paulo is less disciplined, a victim of a father and brother both equally brutish. The conclusion of the boys’ investigations puts an end to their childhood, and to a friendship which they will never regain.

If I Close My Eyes Now, Edney Silvestre’s first novel, transcends its setting and requires no special knowledge of the country to appreciate. There is a follow-up, Happiness Is Easy, which has been published in Brazil, and should definitely be worth a look.