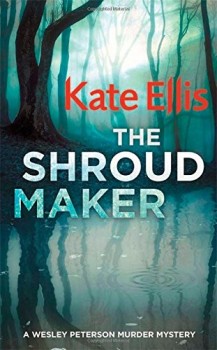 The body of a woman is found floating out to sea in a small boat. The cause of death is pretty obvious – she’s been strangled. DI Wesley Peterson has to work out whether there’s a link between this death and the disappearance of another woman the previous year.

Keeping a long-running series fresh and making it accessible to new readers is a challenge for any author, but it’s one Kate Ellis still rises to admirably. This is the 18th book featuring the pairing of black policeman DI Wesley Peterson and scruffy archaeologist Neil Watson, but it would make as good a starting point as any to their partnership. Backstory is handled with a light touch and it never feels like the book is unduly weighed down by the baggage of the past.

A woman’s body has been found in a small boat in the sea near the picturesque village of Tradmouth. She’s been strangled. The fact that she’s wearing what looks like a medieval costume links her with the annual Palkin Festival in Tradmouth, celebrating the 14th century mayor, John Palkin, a privateer and businessman, being brought to life again both in the festival and in Shipworld, a new fantasy website that’s taking the town by storm.

Peterson is called in to investigate the case of the dead woman and to discover whether there is any link between her death and the disappearance a year ago of Jenny Bercival, a visitor to the town. Jenny’s mother is convinced she’s still alive, but Peterson isn’t convinced.

Interweaving police work with archaeology is one of the hallmarks of the series and on this occasion, Neil Watson is running a dig financed by Chris Butcher, a man with enough money to indulge his hobbies and have an investigation into what might turn out to be the foundations of John Palkin’s house, before building work starts on an extension to his own property.

As usual, the story is interspersed with fragments of the past, this time a combination of extracts from Palkin’s life story written by one of his descendents and a series of letters written by Palkin’s wife, Charlotte, a woman with a growing distrust of her own husband. How you react to this will very much depend on how tolerant you are of the main narrative being interrupted. I tend to skip over anything like this, but for anyone with more patience than me, I think you will be rewarded with an extra dimension to the story, but equally, you can probably do without this if you prefer.

The one aspect of the book that never quite worked for me was the concept of Shipworld. There’s never quite enough description or explanation to provide a handle for what it’s all about, and at times its importance in the narrative seems a little over-blown, without anything of substance to back it up. I would have liked a clearer idea of how it was structured and how its fans interacted with the site, but maybe that’s just my liking for detail.

There are times when Peterson seems a little worthy but dull, but taken as a whole, Ellis does a good job of portraying a family man who’s got a good relationship with his wife and kids – something of a rarity in crime fiction – and is a solid but intuitive copper.

And don’t forget to keep a watch out for the twist in the tale, something Ellis is very good at. As usual, nothing is every quite as neat and tidy as it might first appear.