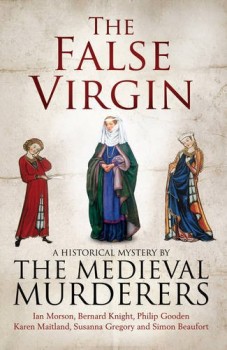 by The Medieval Murderers

A young Saxon aristocrat is found murdered in the chapel where she kept a nightly vigil. The killing is attributed to Norse raiders and the butterflies found on her body to divine recognition of her martyrdom.

They say a camel is a horse designed by committee. Having met a few of the evil-smelling, evil minded beasts during service in the Middle East, I approached my first meeting with the Medieval Murderers – their ninth book – with some trepidation.

Some detective, me! How could established and independently successful authors possibly fall in to the committee trap? Instead they have agreed a basic theme for a story and each developed it in their own way and in their own period of historical expertise. The result is an enjoyable and entertaining multi-age, multi-location series of short stories which will keep you fascinated to the final page.

Beornwyn, a young Saxon aristocrat, is found murdered, mutilated and flayed in the chapel where she kept a nightly vigil. The killing is blamed on Viking raiders and the butterflies found on her body are seen by a superstitious local population as divine recognition of her martyrdom.
‘Saint’ Beornwyn is never canonised by the Catholic Church, but her cult nevertheless spreads and she comes to be regarded as the patroness of sufferers from skin diseases. But wherever she is venerated, rivalry, violence and murder follows.

It’s invidious to pick out favourites from what is a series of superbly conceived and written historical crime novelettes, but I particularly enjoyed Susanna Gregory’s contributions, one with her husband under her pseudonym of Simon Beaufort, Philip Gooden’s portrayal of John of Gaunt’s Westminster palace, and former pathologist Bernard Knight’s Owain Glyndwr adventure in the Malverns.

Ian Morson gives geographical breadth with his Venetian fixer Nick Zuliani’s encounter with the cult on an Aegean island and Karen Maitland both sets the first dark scene and offers a chilling view of life under Thomas Cromwell and his witch hunters and enforcers during the Dissolution.

Gooden returns to round it all off with a thoroughly modern encounter between a Russian oligarch and a dodgy dealer in relics as Beornwyn’s malignant influence makes itself felt again.
The False Virgin is absolutely brilliant – good history, good crime and some real humour, all tantalisingly combined. There are definitely no humps on this committee’s camel!