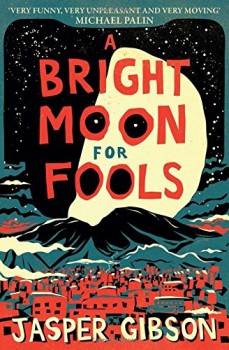 A Bright Moon For Fools

Harry Christmas has flown to Venezuela to shake off his crazed stepson whose mother he has relieved of £26,000, but finds escape elusive.

Harry Christmas is an overweight 56-year-old who finds much in modern life to complain about, and is not afraid to take out his resentment on anyone who crosses his path. It is not only strangers who suffer from Harry’s abominable behaviour; his flight to Caracas has been funded by theft from his second wife Diana, and he is ready to concoct a new tissue of lies without compunction whenever necessary to maintain his wellbeing.

But life is catching up with Harry. His wallet disappears after yet another night of alcoholic excess, and his body is starting to give alarming hints. Even worse, Diana’s fantasist son Slade is after him with murderous intentions, and has a friend who can help him track Harry down. Harry’s rage and dysfunctional behaviour is eventually explained, and after he reaches rock-bottom, he gets an opportunity to rebuild. However, a prolonged period of betrayal and waste has left an awful lot of messes in the rear-view mirror.

This is a terrific book. Harry initially comes across as distasteful but very funny, a little like Ignatius from A Confederacy of Dunces, completely self-obsessed, if rather more literate and sharp. Watching him push his way into the life of Judith, a vulnerable expatriate in a position to bail him out, is horribly mesmerising, but as their relationship develops it becomes clear that Harry is capable of more than unadulterated selfishness.

Harry’s problems are tied up with the death of his first wife Emily, who continues to dominate his thoughts. In fact, his choice of Venezuela as a place of refuge arose from Harry and Emily’s one-time intention to visit the place of origin of her grandmother. It is this that eventually brings Harry to the rural San Cristobal, where he goes through something of a catharsis. The full history is not revealed until the final pages, but by then Harry’s life has been transformed.

The book has several dimensions of excellence to appreciate. Harry’s journey takes the reader from frustration and contempt to sympathy and compassion for the protagonist. Slade, the true villain of the piece, is one of the most chilling characters as you are likely to find in the pages of crime fiction. The key characters are all convincing.

The portrait of Venezuela is as affectionate as it is amusing, with closely-observed little vignettes which bring the country and the people to life. The village scene of San Cristobal is particularly well drawn: a disparate collection of local characters with little wealth but a genuine community, viewed without condescension or romanticisation.

This is Jasper Gibson’s first published novel, although an amusing biographical post-script suggests that he has been honing his craft for a considerable period. It has been worth the wait.