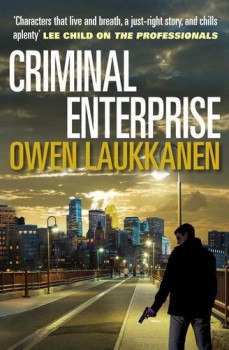 Carter Tomlin is a man driven to bank robbery when he loses his job, but finds it a thrill and his ambition soon becomes overwhelming.

Carter Tomlin’s loss of employment threatens to derail the lifestyle enjoyed by the man and his family, and in desperation he makes a snap decision to rob a bank. It is the sense of power he experiences, as much as the money, which drives him to rob again. He quickly escalates to bigger targets, and having acquired two confederates embarks on a spree of robberies, with more and more killings as Tomlin gets a taste for it.

The lack of proper planning leaves Tomlin open to exposure, and FBI special agent Carla Windermere is soon on his trail. Unfortunately Carla is saddled with a boss who insists her activities are directed elsewhere. Carla would like to get back to working with Kirk Stevens of the St Paul Bureau of Criminal Apprehension, with whom she previously worked successfully, but Stevens has promised his wife he will stop playing the hero.

Stevens becomes drawn in, however, when he takes advantage of a social relationship with Tomlin to take a look around his house. Initially sceptical, Stevens becomes persuaded that Tomlin has something to hide. Working together, Carla and Stevens catch up with the development of Tomlin’s criminal career, but with Tomlin losing control, things quickly get very personal.

Written in 137 short chapters, this book creates tension from the first page, and builds it steadily thereafter until the final showdown. Tomlin is believable as a man in his 30s, a corporate accountant and family man, who is pitched out of orbit by loss of a job and the status attached to it, and suddenly finds a taste for danger and the heady brew of power over the life or death of others. As Tomlin loses his inhibitions, the body count builds up, and the consequences of failure to arrest his progress become increasingly horrific.

Interleaved with Tomlin’s story are the efforts of the two crime-fighting protagonists to close him down, and again the portraits feel genuine. We hear enough of their lives, both personal and professional, to get a feel for them as real people. Stevens is assigned to cold cases, and despite the occasional success misses the action, notwithstanding his promise to his wife to avoid hazard. Carla’s dedication to the job has alienated past boyfriends, so her life is entirely bound up with work, although her sex and colour hold back the promotion she merits.

Carla and Stevens make an interesting team in Laukkanen’s second book and their battles against convincingly-drawn antagonists provide all the ingredients for popular success.