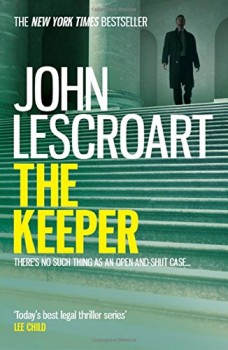 When a wife goes missing, her husband looks like the prime suspect. Investigator Abe Glitsky sets out to prove otherwise.

Katie Chase, a devoted mother, disappears from her house one night and the San Francisco police like her husband Hal for her murder, especially when it is revealed that the marriage was in trouble and Hal was having an affair. Hal, expecting arrest, goes to lawyer Dismus Hardy, who calls in Abe, a recent homicide detective retiree, to look for exculpatory evidence.

One area of interest is the prison where Hal is a guard. A string of deaths amongst the incarcerated is causing concern, and rumour has it that the man in charge, but especially his deputy, Foster, are running the prison as an income-generating asset, and have a low tolerance for opposition. Hal is implicated, and if Katie knew and threatened to reveal what she knew, Foster would also have a strong motive. But the guards at the prison are tight, and Abe will have difficulty finding proof.

John Lescroart has a couple of dozen thrillers to his name, with a strong legal component often featuring Hardy. In this outing, Dismus takes a back seat to Abe. There is no court time and the book is best described as a police procedural; Abe is actually re-employed by the SFPD during the course of the action.

The informed legal commentary is still, however, one of the most interesting facets of the book. As the case unfolds, we get the implications of any new evidence for the police case, what procedures need to be observed to establish an untainted chain of evidence, and plenty on related technical aspects.

What we don’t get is any impression of great concern from the parties most centrally involved with the case. The prospect of a lifetime of incarceration, or worse (this is USA, after all) for the murder of a beloved wife seems not to provoke the panic and desperation in Hal one would expect, nor the same in a girlfriend supposedly very much in love with Hal. The emotions we hear about are those of Hardy and Abe – their determination to find the true culprits and vindicate their efforts. We also get far more background about them, and they emerge as far more real than those with the most to gain or lose from the case.

So overall, The Keeper is not a book that will keep you on the edge of your seat, but it’s entertaining enough. The pace of revelations about what is going on is nicely judged so there are plenty of twists and turns, and plenty of theorising about possibilities. There is a nice twist at the end, sufficiently signaled in earlier chapters so you don’t get that feeling of having been sandbagged that you are sometimes left with after a whodunit.