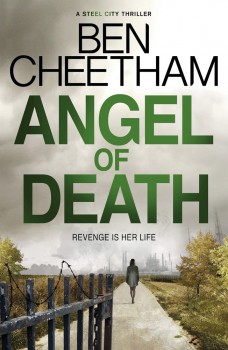 An abused woman seeks revenge on the ring of middle-class professionals who turned her into a drug-addled whore, while a disillusioned veteran detective tries to exploit her quest to bring down a vicious criminal gang.

Ben Cheetham writes with skill, shrewd observation and real care about his Yorkshire hometown, but is hampered by the fact that his coppers are members of South Yorkshire police – perhaps the most incompetent, to put it at its mildest, force in Britain.

Consider their 30-year record. Orgreave Colliery, where former officers have alleged they were made to sign statements part written for them about the pitched battle during the 1984 miners’ strike; the force’s role in the Hillsborough disaster; its lack of action over a huge child abuse ring in Sheffield; a repeat performance in the Rotherham ‘grooming’ scandal; the inept handling of the raid on Cliff Richard’s home; the forced resignation of its police and crime commissioner.

Without mentioning any of these, Cheetham perhaps uses them to justify the attitude of his main police protagonist, veteran DI Jim Monahan, who has come to doubt the justice of the law he is sworn to enforce. Through the jaded detective, the author examines moral dilemmas we all face about how we feel certain crimes should be dealt with – and also the effects of constant exposure to such filth on our law enforcers.

Monahan is assigned to the case of a bankrupt self-made businessman who has murdered his wife and attempted, but failed, to kill his two children. A horrific child abuse DVD found on the dead man’s TV alerts him to the fact that this is far more than a murder/suicide by a man determined not to return to the poverty out of which he had clawed his way.

Meanwhile, the hate which drug-addicted prostitute Angel – her working name – feels for the men who have used and abused her explodes into violence, triggered by an incident involving a young girl.

Angel’s is a classic tale – a teenage runaway from an abusive home, groomed, sexually abused, addicted, whored – which could be set in any major city. Her revenge on the respectable, middle class professionals who have subjected her to a life of degradation is violent and gory – but somehow quite easy to justify.

It’s hard not to feel empathy with Angel, or with Monahan, who also faces tough decisions as he sees his work undermined by the growing careerism and political correctness of his service. His disenchantment and bitterness leads to an ever-increasing resentment of authority, only tempered by fear of a lonely retirement.

In a major step up from his self-published debut Blood Guilt, Cheetham does not flinch from the most disturbing issues. Angel’s horrific past is highlighted in graphic detail and the sheer relentless pace of a story as relevant as today’s news sucks in the reader.

The paths of the young woman bent on revenge and the detective apparently determined to self-destruct, cross and re-cross as this accomplished thriller builds to a bloody climax and Cheetham’s denouement provides a satisfying final twist.