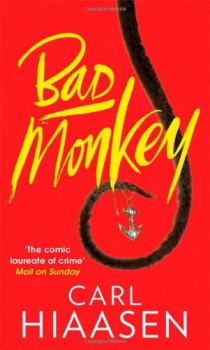 When a tourist fishes up a human arm from the waters off Key West, the local sheriff sees only problems. Yancy, a disgraced ex-officer, is, however, keen to pursue the matter, hoping it will lead to reinstatement.

Yancy is currently a restaurant inspector, required to poke into the back areas of local eating places and as a consequence unable to eat anything but packaged power bars. His demotion followed a drunken accusation against a fellow police officer who was milking the Crime Stoppers tip line, although a very public incident involving assault on his girlfriend’s husband with a vacuum cleaner attachment did not advance Yancy’s prospects.

When a tourist fishes up a human arm from the waters off Key West, the local sheriff sees only problems. Yancy is keen to pursue the matter, though, hoping it will lead to his reinstatement.

On the sheriff’s instructions, Yancy takes the arm down to the Assistant Medical Examiner in Miami, Rosa, who points out one or two curious features for a body part supposedly adrift following a boating accident. Yancy takes the arm home and stores it in his freezer, and eventually hands it over to the wife of Stripling, the original owner. At the funeral he meets Stripling’s daughter, who is convinced that the wife organised Stripling’s murder. Yancy is encouraged to make further enquiries, ably assisted by Rosa, and the two soon make some significant discoveries.

The first thing to say about this book is how funny it is: as many laugh-out-loud moments as I can recall in a work of crime fiction. Hiaasen’s character portrayal is as convincing as it is mordant: self-interest rules and the problems of others are of no more than academic interest. At the same time, the ineptitude of malefactors is so overwhelming that no crime would go undetected, were it not that crime-fighting personnel suffer from much the same flaws.

Besides the main crime narrative, there are several other comic stories running through the book. One of these is Yancy’s battle with his neighbour, who has bribed planning officials to gain permission for a building substantially bigger than code, blocking Yancy’s view of the sunset and driving away the dwarf deer which formerly used to visit the site. Another is the eponymous monkey, once featured in film together with Johnny Depp, but now habituated to fried sea food and exhibiting a range of anti-social habits to challenge the most dedicated animal-lover.

The monkey has taken refuge in the Bahamas with Neville, who is unceremoniously ejected from his idyllic beachside home by a developer seeking to re-invest gains from a Medicare scam. Neville’s initial reaction is to hire the local voodoo woman to put a curse on the man responsible, but results are slow and she shows a distressing interest in his body, and his monkey.

It is difficult to fault this book; the action is non-stop, the characters are varied and interesting, and the dialogue is sharp and amusing. Hiaasen does perhaps indulge in a little too much post-event accounting to give the reader an explanation as to what just happened, but if this is the price of holding the story together it is one worth paying.