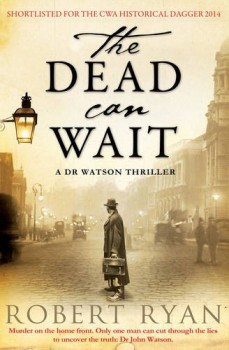 The Dead Can Wait

Dr John Watson is back from the trenches, trying to help soldiers affected by shellshock. With Holmes unavailable, he is tasked with solving the mysterious deaths of seven men at a secret establishment where a new weapon which could shorten the war is being developed, but must battle Army indifference as much as German agents.

Field surgeons aren’t idiots, so it’s nice to see that bluff product of the Raj, John Watson, for so long a second fiddle and sounding board to the genius of Holmes, deservedly come into his own.

Brilliantly timed to coincide with the centenary of the outbreak of the War To End All Wars, the good doctor has returned to the Army and is now a major in the Medical Corps. The senseless slaughter of the Somme offensive of 1916 becomes a background to highlight his humanity, compassion and wealth of commonsense.

Emerging from the giant shadow of Holmes, he becomes in Ryan’s hands, a rounded, genuine and appealing very English hero, deeply affected by the horrors of what he has seen and doggedly determined to do something about it.

This follow-up to Dead Man’s Land sees Watson back from the horrors of the Flanders trenches and involved in pioneering work in the treatment of PTSD – or shellshock as it was known. His expertise leads to him being called on to assist in investigating an incident at a secret weapons testing site where seven men have died and the one survivor is in deep shock.

Hampered by a hidebound military, political interference and a target for a ruthless German spy, Watson must resolve a mystery which could prove vital to his country’s war effort.

If it all sounds a bit Bulldog Drummond, it is – and none the worse for it! Watson’s character is brilliantly explored; his doubts regarding his own investigative abilities, rather than as part of the most redoubtable team in detective history, his deep concern for his former partner – and for those damaged by their experience of war – his almost simplistic patriotism and decency, make him a sympathetic and compelling hero.

And he is strongly supported by the cast. Other characters, including returnees such as the redoubtable Mrs Gregson, and a truly fearsome female German agent – more Assassin’s Creed than Mata Hari – keep the plot moving at a scorching, but always realistic pace.

Multiple storylines, the varied characters with their different motivations including a convincingly manipulative Winston Churchill – Ryan’s version of his speech to a group of soldiers is as inspiring as any he actually was to give – all set against an historically and geographically accurate background make this a fascinating read.

But in all this very adult Boys’ Own adventure stuff, the author never forgets the true horror of the overall setting. His descriptions of the First World War, with all its stupidity, waste, filth, hysteria, destruction and death are neither stinted, nor are they gratuitous and make for a gritty and sobering read.

If there is a weakness in this clever exploration of the wartime atmosphere of desperation and political tensions, it’s the ‘detective’ side of the story itself and an ending that appears contrived. But overall it’s a brilliant piece of work – probably the best piece of WWI fiction you’re likely to read.