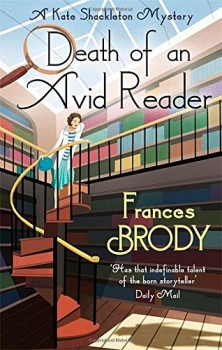 Frances Brody’s Kate Shackleton series have been marketed as cosies, the strange sub-genre largely aimed at a female audience, which treats murder as almost genteel and where detectives tend to be high-minded, thoughtful and well-connected, if not actually aristocratic.

But judging by her sixth adventure, Kate, who is all of those things, could stand on her own in the mainstream of crime fiction, although she’d never attract readers who like lots of action, blood and guts.

Death of an Avid Reader is beautifully written, peopled by largely likeable characters with believable conversations and cleverly plotted with enough dead ends and red herrings to keep you reading. It’s a quiet triumph which deserves a far wider audience.

Kate herself is a compelling heroine. Widowed in the Great War in which she served as a member of the Voluntary Aid Detachment – those mainly upper-class girls who felt their place was at the front where they often bullied and hectored their way to become nurses under the most appalling conditions – she is a clever and determined member of a group matured by what they did and saw.

And as a more than capable and self-reliant woman in a 1920s society that still regards her as a second-class citizen, she makes her case with quiet authority. Kate has launched successfully on a career as a detective, and she is engaged by former London society beauty Lady Coulton to find her illegitimate daughter, given up for adoption 20 years ago.

That investigation hits what appears to be a dead end, but Kate’s attention is soon focussed on a case closer to home when the body of a respected professor is found in Leeds Library and she gradually begins to wonder if the two can somehow be linked.

Her dual quest takes her from respectable drawing rooms into the grimy and deprived back streets of a Leeds already beginning to feel the pinch of the coming Recession, leads her into physical danger as she uncovers a deeply buried past crime – and introduces her to a remarkably intelligent monkey!

This is a well written, engaging story, easy to read and positively breathing the atmosphere of its setting and time. Don’t be put off if you’ve not met Kate before. This is almost the perfect stand-alone, with enough references to enable you to fill in the background for yourself without in any way detracting from the plot and what ‘hangover’ characters there are fit naturally into the story.

Death of an Avid Reader is as suitable for a male audience as its more conventional target. I’m impressed – and off to explore Kate’s earlier cases. If they’re as good as this, they’ll be well worth the effort!