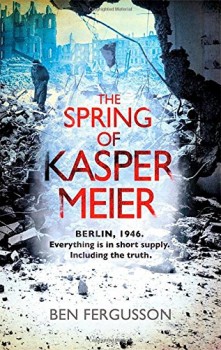 The Spring of Kasper Meier

In 1946 Berlin, Kasper Meier is pressured to locate a RAF pilot but his attempts to find out the truth put him in extreme danger.

Post-war Berlin is a wasteland of half-demolished buildings and rubble, in which the survivors scrape a living on the barest of essentials. Food and clothing, fuel and cigarettes are in desperately short supply and anything that can be bartered is precious in a battle for existence.

In this terrible place, Kasper Meier lives with his aged father on the ruined upper floor of a tenement, and is as skilled as anyone in trading goods and services, including information. He gets a visit one day from Eva Hirsch, a girl not yet 20, seeking the whereabouts of a ginger-haired RAF pilot, supposedly for a friend who, after a brief encounter, has found herself pregnant. Kasper is disinclined to get involved, but Eva produces evidence of his homosexual activities. Sensing Eva is too nice for blackmail, Kasper drags his feet, but soon finds himself persecuted by a pair of devilish twin children, and reluctantly makes enquiries.

Kasper’s investigations uncover a mysterious Frau Beckmann behind Eva and other young German women who have suffered at the hands of allied soldiers since the war ended. In parallel we hear of allied troops being murdered across the city, and a connection seems clear. Kasper is presented with the means of escape, and hopes to take young Eva with him, but may already be too entangled with these events to extricate the pair of them.

This book is convincing in its setting, and the unpleasantness of life: the dirt, the impossibility of keeping clean, warm and properly fed, the lack of medical supplies, and the atmosphere of mistrust and depression is well conveyed. Kasper maintains a cold and unpleasant front, but we know the yearning he has inside for a human contact. He constantly dwells on thoughts of an old lover, now disappeared, and sees something in Eva that makes him want to protect her.

The tension is excellently managed: from the beginning there is a sense of threat to Kasper because his father has a room he is not strictly entitled to, because of his sexual orientation, and because of the sleazy deals he is involved in, as well as the risk of harm from random accidents in this most challenging of environments. The sense of menace increases as the sinister twins ramp up their campaign of harassment, and comes to a head as events close in around Kasper and threaten to overwhelm him.

This is Ben Fergusson’s first full-length novel. It is an impressive start and I’ll await future works with interest.