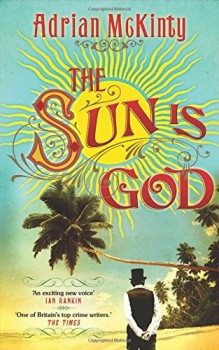 The Sun is God

Ex-military foot policeman Will Prior exiles himself to a 1906 German Pacific Colony, and is asked to investigate a death on an island where a group of sun-worshippers pursue an unconventional lifestyle.

Following a traumatic episode in a British concentration camp for Boers, Will Prior leaves the Military Foot Police in South Africa, and exiles himself to Herbertshohe, in Deutsch Neu Guinea. Scraping a living as a farmer, he agrees to a request from the German authorities that he use his experience  to investigate a death on the nearby island of Kabakon.

The death was reportedly from malaria, but the doctor at Herbertshohe found water in the lungs of the dead man. The island’s occupants are limited to a small community of sun worshippers, Sonnenorden, who believe that nudism, sunbathing and a diet of coconuts will give them immortality.

Prior sets off for Kabakon with Kessler, from the German establishment, and Miss Pullen-Burry, a visiting Englishwoman of strong character. The sun-worshippers have a disciplined way of life, for which they have a well-developed philosophical basis. Despite one or two unexpected findings – that the group includes women, and the profligate use of heroin (newly developed by Beyer and an exemplar of the superiority of German science) as a cure-all – there seems no reason for a murder, if such it was. But as Prior probes deeper, he comes to realise that the community harbours strong passions.

This is an excellent read, altogether a somewhat bizarre episode based on real events, and with several real characters, although the author says that he has subordinated facts to the interests of the novel where necessary. Given the challenge of the climate, the number of biting insects, and the limitation of diet to coconuts and bananas, the survival of the sun worshippers for even the few years did seems remarkable, and the willingness of the participants to put themselves through it says a great deal about their strength of character.

The participants in this drama are all well drawn enough to bring them to life. The Sonnenorden act in strict accordance with their belief that mankind needs to get back to a simpler way of living, and if perhaps rather lacking in humour this only seems appropriate to their nationality and dedication. Miss Pullen-Burry is a favourite, just the sort of rather potty but absolutely solid women traveller who braved the perils of travel a century ago.

As to the death itself, the author says in reality it was never solved, and the answer he finds in the novel is therefore conjectural. It all hangs together as a story, though, and after a period where Prior and Kessler find difficulty in getting to the heart of the matter, the book comes to a gripping conclusion. It’s excellently written with sharp dialogue – quality stuff!