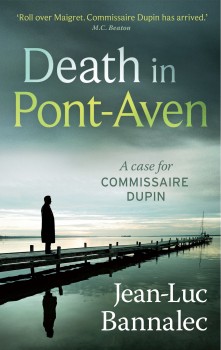 Commissaire Dupin is called to the murder of a hotel manager in the picturesque Breton village of Pont-Aven, but finds those closest to the dead man reluctant to tell what they know.

Pont-Aven is a pretty village on the coast of Brittany, popular with tourists for its quaint streets and old cottages, beaches and local seafood, and its association with 19th century artists, in particular Gauguin. The tranquility is disturbed with the fatal stabbing of Pennec, the 91-year-old owner of the Central Hotel, whose family has long been connected with the artists who favoured the locality.

The head of the investigation into the crime is Commissaire Dupin, banished from Paris for being insufficiently emollient when dealing with his superiors. Dupin interviews the staff at the hotel, the son and daughter-in-law of the dead man who stand ready to replace him as manager, a half-brother politician, and other local contacts, but finds no hint as to what might have generated enough strong feeling to lead to a homicide.

The next night a break-in at the hotel restaurant, where the murder occurred, further complicates the matter. Dupin and his staff, Le Ber and Labat, and forensic expert Salou, can find no indication of anything missing or disturbed. When Pennec’s son is found dead at the foot of some cliffs, it is clear that Dupin is missing a large piece of the jigsaw puzzle; but what is it he has overlooked?

This book could be described as a rather old-fashioned whodunnit, with a clue in the first few pages that the reasonably perceptive reader will spot. The story hangs together sensibly and although Dupin has his addiction, it is only to decent coffee, which makes a change from many of the tortured protagonists who populate much of contemporary crime fiction.

Dupin is absolutely at the centre of the action throughout the book, but the character is strong and interesting enough to bear the pressure. There is something of the Maigret about him, although he is less regular in his mealtimes. He doesn’t have a wife at home waiting for him, but has Nolwenn, a brilliant secretary, who keeps unwelcome distractions at bay as well as providing useful research when necessary.  He is maddeningly unwilling to talk to his subordinates, or indeed pretty well everyone, and spends hours wandering the lanes of the village, theorising.

There is also plenty about the area of Brittany in which the story is set, enough to whet the appetite for the food and make a visit sound an attractive proposition. The locals seems to spend a great deal of time speculating about the weather, no doubt as in UK a result of unpredictable Atlantic weather systems. There is much to like here, and it looks as if Dupin will have a second outing in English this summer.