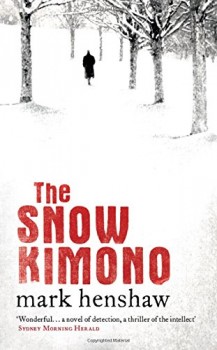 Retired inspector August Jovert meets a Japanese man with a tragic story to tell, a tale which resonates with echoes from Jovert's own past.

August Jovert, retired and living in a Paris apartment, receives a letter from a woman claiming to be his daughter. The woman gives an Algerian address, a place where Jovert once held a pivotal position combating independence activists.

Sometime later he returns home to find the resident of the flat below his own, former law professor Tadashi Omura, at his door. Over the next few weeks Omura relates a story set in Japan which began when he was a schoolboy, a haunting tale full of love, betrayal and the inexorable workings of fate. This forms the greater part of the book, around which Jovert's story is wrapped.

The author is not Japanese, nor has he lived there according to the biographical note, but the Japanese sections certainly convey a picture of the country which seems consistent with native literature. The pictures created, such as Omura and his small daughter walking through the snow, are often of great beauty, and focus on a few small details which bring the scene to life. At the same time the thoughts of the participants are revealed only sparingly; feelings are frequently implied rather than plainly stated.

In case the above sounds somewhat thin, it should be stated that the story is a very powerful one, full of strong emotions and terrible dilemmas. Rural poverty is startlingly depicted, the creation of the eponymous Snow Kimono being an annual task by a family to ensure they have enough to eat. This and other features of the story give it a fairy-tale feel.

Jovert's past history is revealed fairly late in the book, working in late 1950s Algeria to infiltrate locals seeking to throw off the colonialist yoke. The war in Algeria was very bitter, with torture and atrocities by both sides. It is at this point that some parallels appear between Jovert's story and that of Omura, at least to the extent that moral choices have a long-term impact on the person exercising choice.

The author, through Omura, puts forward the Japanese assertion that 'if you want to see your life you have to see it through the eyes of another.' This gives an explanation for Omura's otherwise puzzling wish to give Jovert his life story, as well as the sections into which the book is divided, headed with the names of the key characters.

The action moves back and forth in time, between present and past tense, in a way that some readers may find distracting. The gaps and uncertainties do, however, mirror those you might find in any story heard third-hand, and skilfully build up tension to the final reveal, which is no anti-climax.