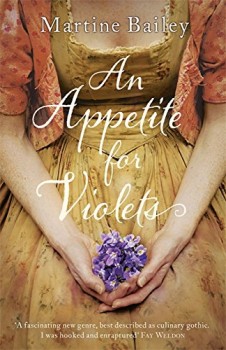 An Appetite For Violets

Irrepressible under-cook Biddy Leigh wants only to wed her sweetheart and set up a tavern. But when her elderly master marries a much younger woman, Biddy is swept in a world of secrets and lies.

Martine Bailey has undoubtedly found the recipe for success with her debut novel about the adventures of an irrepressible northern under-cook pitched into a situation far beyond her knowledge or control – a sort of 18th century Gothic Masterchef.

Biddy Leigh is a plain-talking under-cook at an English mansion. When a new young mistress arrives at the house, she is drawn into a dark intrigue, the roots of which are not fully revealed until the end of the book. Her only ambition when we meet this irrepressible cheerful and common-sensical girl is to marry her sweetheart and open a tavern. Her subsequent travels through France and Italy open new horizons and set new challenges for her.

Her only guide to her behaviour is her own solid sense and a journal named ‘The Cook’s Jewel’, gifted to her by an elderly cook she adores, full of recipes and behavioural hints jotted down through many years by a succession of women.

Biddy’s story brilliantly combines historical, mystery, crime, romance, comedy and Gothic elements and while parts are dark, it has an overall cheerful feel. Like one of the recipes from her cook’s bible there are many ingredients, some of which you would think would not blend, but when mixed and cooked, the finished article is a triumph.

Bailey blends the language and argot of the time lightly and skilfully and it’s rare to encounter such great descriptive passages. Throughout you can hear, see, smell and taste what is happening – and somehow she manages to pack it all in along with cultural and culinary observations without disrupting either the story’s flow or timing.

But there’s more to this than Biddy, delightful though she is. Some of the varied but always realistic supporting cast contribute their own perspectives – the Indonesian slave Loveday in particular offers a poignant reminder of what it is to be dispossessed and far from home. There is also some clever observation about the relationship between rulers and the ruled, love and companionship, some great historical stuff on the emergence of restaurants, an illuminating treatise on sugar-craft and ice cream, all packed into a well-disguised and cleverly executed mystery story full of twists and turns with some powerful, but never overstretched, dramatic moments.

This book will give you a real insight into the period – and it’s a great read with real depth. You don’t have to be a foodie to enjoy it – although I’d give a year’s wages for Michel Roux to recreate some of the fascinating recipes, for Bailey’s brilliant descriptions and Biddy’s innate enthusiasm will soon give you an appetite for her culinary world.

Bailey’s complicated recipe, where both timing and ingredients must be exactly right to produce the perfect result, has worked out a treat. It’s a real tour de force which will appeal to any reader – male or female – looking for a crime story which is entertaining, informative and undoubtedly and defiantly different.