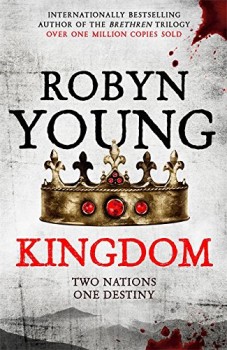 Robert Bruce, king of Scotland, fights to throw the English occupiers out of his country.

The mists and myths which pass for Scottish history have been explored by fiction writers since Walter Scott unveiled his romantic vision of a downtrodden country fighting for its identity and independence against a bullying neighbour.

In the final part of her superb trilogy, Robyn Young does it better than almost anyone else. Exhaustive research has revealed little about the period, so she has taken what facts do exist and welded – or amended – them to create a thrilling and believable narrative.

Scottish historians still cannot agree on the battle site of Bannockburn or the actual roles of some of its participants. This culmination of the series has much to say about the envy, passion and ambition which drove two countries into a long and bloody conflict – and has echoes in the politics of today.

In 1306, Robert Bruce reaches his nadir. Having seized the Scottish crown three months before, his forces are tricked and destroyed at the battle of Methven Wood. This is a Bruce many will not recognise. A fiercely ambitious and driven man, he has murdered a rival in a church and twice broken sacred oaths made to the English king Edward Longshanks – more a Balkan warlord than the cross between Che Guevara and Nelson Mandela many nationalists would have you believe.

He is hated by many of the Scots nobility, has virtually no popular following and spends the following years making dubious deals as he attempts to rebuild his army for one last throw at the English who occupy much of his country and have most of his family in various harsh conditions of imprisonment.

The turning point comes at Glen Trool, a minor engagement about which so little is known, against Scottish rivals boosted by some English troops, but now built into one of Bruce’s greatest victories and commemorated by completely inaccurate ‘information’ boards at its alleged site.
The battle at Loudon Hill where he defeated a largely English force under Aymer de Valence, Edward’s Lieutenant of Scotland, was far more significant as after it, for the first time, many Scots acknowledged him as their king.

Bruce’s ‘lost’ years are matched only by the intrigue at Edward’s court. His death in 1307 sparked four years of near civil war as the English aristocracy rebelled against his inept son’s lack of interest in the war and his favouring of his lover Piers Gaveston, which offers plenty of room for speculation about relations between Scots and English knights who had once been colleagues – a field Young is quick to exploit.

This brilliantly written story of men as capable of loyalty and love as they are of the most bloody slaughter allows her to explore an area history cannot fill. What motivated them to act as they did? ‘History’ offers one version. Young’s bloodsoaked tale offers another just as plausible. If she does no favours to some of the English – de Valence in particular – it is in keeping with the brutal times.

If you haven’t read the first two books, Insurrection and Renegade, which lead up to this, you should. Taken as a whole they are probably the most exciting novels to come out of this largely unexplored period for very many years. And all this without a single spider in sight!