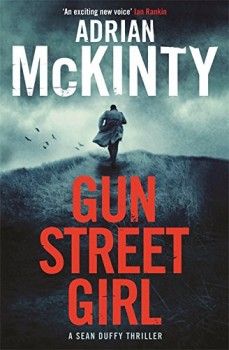 Inspector Sean Duffy, one of few Catholic officers in the Royal Ulster Constabulary, is called to a double murder, tagged a family dispute but with several indications of a professional hit.

Northern Ireland is an exciting place to be in 1985 - Thatcher’s initiative to bring compromise into the political process is receiving active objection from the extremists on both sides, and the RUC are heavily engaged in battling riots and sectarian violence. Not that other types of crime are any less in evidence.

In this fourth outing, Inspector Sean Duffy is called out to assist his sergeant when a well-to-do couple are found shot dead. Soon after, the family’s only son, Michael, is found dead at the foot of cliffs nearby, leaving a terse suicide note. Duffy is sceptical about the murder/suicide explanation, and does some digging. A visit to Oxford is necessary to establish that Michael left the university shortly after he was involved in the death of a student from a heroin overdose, when an un-named man mysteriously disappeared from the scene.

Back in Belfast, there is concern about the disappearance of six ‘javelin’ missiles from local manufacturer Shorts. From his contacts in Special Branch, Duffy knows that the fired security manager, Vardon, and Moony, a shop steward, are suspected in connection with the theft. Eventually Duffy makes a connection between the two events, and extracts information which enables him to get to the bottom of things.

This is a fast-paced thriller with never a dull moment. If Duffy is not working the murders, he is out on riot duty, doing battle with his Protestant neighbours, or helping out his chief inspector resolve a contretemps at a brothel. He has a brief fling with a reporter on a local newspaper, and another with a recruiter for MI5 who has worked with him before and recognises his potential. Sleep he finds difficult, but liberal self-medication with Irish whiskey, cannabis and the occasional snort of cocaine keep him motivated.

Narrated by Duffy in the first person throughout, we are in a position to appreciate his laconic view on events, voiced or unvoiced, and despite the bleak outlook in Northern Ireland at the time the book is consistently funny. Even Duffy’s need to check for tilt bombs every time he gets in his car is made into a recurring joke.

Duffy is a vinyl enthusiast, and punctuates his progress with commentary on the music of the day. Several crime writers have tried this, including Pelecanos, and unless you share particular interest in the genre it can get wearing - like someone banging on about a hobby in which you have no interest. Here we don’t get too much of it, and it does help to recall the time for those old enough to have lived through it.

McKinty ties his story up at the end with episodes which parallel factual incidents at the time, and leave the protagonist stuck in the RUC with enough against him to rule out promotion, ensuring that he will continue to be available to engage with crime at a working level.