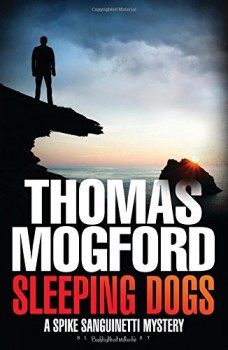 Lawyer Spike Sanguinetti takes a holiday in Corfu but finds himself involved in a murder, followed by a very dangerous trip to Albania.

Lawyer Spike Sanguinetti has had three previous adventures, all of which played out with substantial periods in his home of Gibraltar. In his latest outing he is exclusively in Corfu for a much-needed break, at the holiday home of Peter Galliano, Spike’s legal partner. Keeping him company is his ailing father Rufus, and Jessica Navarro, a beautiful policewoman.

The group visits the adjoining luxurious Hoffman estate for a party, which breaks up in disarray when a young man, Arben, is found stabbed, dead. Arben is working for the Hoffmans and is from nearby Albania, as are Peter’s domestic staff, Katerina and her sons Lakis and Spiros. Peter and his guests are stunned when Lakis is arrested the next day for Arben’s murder, his fingerprints on the weapon discovered in his room.

Spike is roped in to help, and Lakis tells him of a witness, Calypso, who can establish an alibi. Spike and Jessica find where she has been living but the girl has gone, leaving signs of a struggle. Soon after, Lakis is gunned down while being moved, revenge by Arben’s family and a matter of vendetta. This can extend to Spiros too when he becomes of age, unless Spike can find Calypso and have her convince Arben’s family that Lakis was not the culprit.

As with previous books in the series, Sleeping Dogs is full of varied characters. Some of these we have met before, although we find out more about Rufus and Peter, and Jessica has been elevated from an old flame to Spike’s current romantic interest. The Hoffmans are briskly sketched out as a super-rich dynasty with plenty of internal strife, and Katerina and family as sympathetic but vulnerable.

The series has hitherto always featured interesting locations: here we get a taste of Corfu and Albania, to the uninformed surprisingly close. Albania is not necessarily an agreeable holiday destination, but provides a very challenging environment for the protagonists to demonstrate their mettle, especially where they find it necessary to visit a village devoted to the production of cannabis, where the locals are very serious people.

The book is densely plotted and with plenty of action and short chapters to propel the reader on. Spike and Jessica do all you could expect of your lead characters, but have no special skills except for quick minds and a preparedness to do the right thing. Despite the stress which inspired the Corfu trip, Spike shows signs of adopting a more ordered life. Whether he will be able to settle and still provide the thrills we have come to expect of him will be interesting to see.