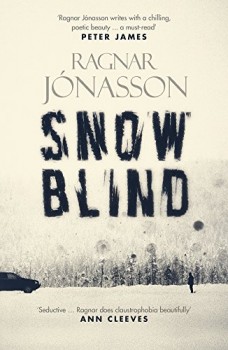 New cop Ari Thor Arason is offered a job in the far north of Iceland. A famous writer dies, a woman is attacked – and the village is cut off by an avalanche with a killer on the loose.

Snowblind is the first in the Dark Iceland series – and yes, there’s oodles of snow and angst. Avalanches of snow, in fact. The title’s a bit of a giveaway, really.

Ari Thor Arason has just finished at police training college when he’s offered a job in Siglufjordur. We’re talking way out in the sticks – a fishing village in the very north of Iceland, accessible only via a small mountain tunnel. But jobs are hard to come by in the midst of the country’s financial crash, and despite his girlfriend’s disapproval, he decides to leave Reykjavik.

This is the sort of village where no one locks their doors, and everyone minds everyone else’s business for them. So it’s a definite case of ‘you’re not from these parts’ for the faintly bemused Ari Thor, where news that he dropped out of theological college spreads in seconds, earning him the nickname ‘the Reverend’ from both colleagues and strangers.

A famous writer falls to his death from a theatre balcony, and a young woman is found bleeding and unconscious in the snow. Ari Thor discovers that this isn’t quite the idyllic setting his boss Tomas would have him believe. And very soon there’s a good reason for Ari Thor to lock his doors.

This is a first outing in English for Ari Thor, bolstered by a pin-sharp translation by Quentin Bates, himself a crime fiction writer. And this is clearly a series worth the effort. Jonasson evokes an almost timeless feel to his narrative, with only mobile phones and computers reminding us that this is the 21st century. It’s no surprise, either, to discover that Jonasson has translated 14 Agatha Christie novels into Icelandic, as Snowblind has echoes of Golden Age stories. Siglufjordur may be light years away from St Mary Mead, but villagers here have secrets to hide.

Ari Thor is an uptight hero with an uncomfortable past and an uncertain present. And his fellow officers also seem to have unsettled lives. But this never unbalances the story and it’s certainly a world away from the clichéd cops with too much baggage being towed behind them.

Snowblind is a dark, claustrophobic read, and Jónasson evokes perfectly the 24-hour darkness, the biting cold, the relentless snow and fear of a killer on the loose in a village suddenly cut off by an avalanche. His crisp, bleak prose is an exemplary lesson in how to create atmosphere without producing over-inflated books that would cause their own avalanche if dropped …

And kudos, too, to new indie publisher Orenda Books for another unusual and powerful crime novel to follow Paul Hardisty’s Yemen-based thriller The Abrupt Physics of Dying.