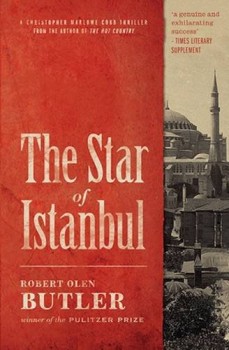 The Star of Istanbul

Reporter and US government spy Kit Cobb has a suspect German under investigation, crossing the Atlantic in 1915 on the Lusitania.

Under the cover as his day job as a reporter for the Chicago Post-Express, Christopher Cobb is travelling first-class to Europe on the Lusitania’s final voyage, instructed to keep watch on Walter Brauer, a German agent. Also travelling is the beautiful and famous actress Selene Bourgani, with whom Cobb almost immediately forms a liaison.

Despite their mutual sexual attraction, Bourgani reveals little about her life, although Cobb quickly realises that she and Brauer have some clandestine connection. When the liner falls victim to a U-boat, all three are rescued, Selene only because of Cobb’s help and quick thinking.

Nonetheless, she and Brauer take off for London. Cobb follows, and witnesses a meeting where Bourgani agrees to travel to Istanbul on a mission for the Germans. Cobb is instructed to stay on the trail, and eventually becomes fully aware of the details of that mission, and of Selene’s own intentions on arrival in the crumbling Ottoman Empire.

The publication of this book could be said to be very timely at almost exactly a century after events, some factual and momentous: the sinking of the Lusitania, Gallipoli, the Armenian genocide. While the fiction is built round these pillars, there is no attempt here to say anything new about history. The book is, however, excellently informed by research into areas like the layout of the Lusitania, the characteristics of dress, weapons, taxi-cabs, of the date, what Escoffier was serving at the Savoy, and other telling detail, which adds so much to verisimilitude.

Despite the difference in era, Cobb is very much a James Bond-type character, sexually active but keeping his personal feelings under check, always willing to take risks to get the low-down on the opposition, and ready to kill without compunction. He’s a bit too smooth sometimes, but the commentary on his thinking as he runs through the possibilities opened up by newly-acquired knowledge is engaging.

The book is well-paced, both dialogue and descriptive passages tight, the exploration of the gaps in Cobb’s understanding given just the right weight, and controlled well until the reveal. The only aspects of the writing that might be found difficult are the stream of consciousness passages used for particularly exciting events, but there is no doubt the device pulls the reader into the action.

If you enjoy well-researched and well-written historical fiction, you will definitely find it worth giving Robert Olen Butler a try.