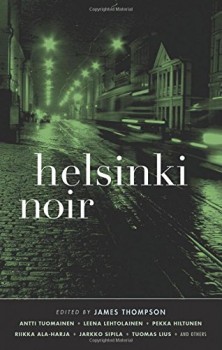 Under the surface of a peaceful Finnish social democracy lie some disturbing undercurrents, tales of society’s most damaged, in this dark collection of short stories.

Helsinki is the latest in a now extensive list of Akashic Noir books, which gather short stories based on a specific location. The 14 stories included here have plenty of the snow and angst expected in Scandinavian fiction, but few trees: the action is confined to the concrete of the Finnish capital.

Despite the different background of the authors, some writing in Finnish, some in Swedish, and some in English, the collection has a common feel, and a dark one it is too. These are nightmarish visions, unrelieved with any hint of humour other than the very blackest. Even the structures of the city seem hostile, and two of the stories relate an incident of the street flooding with human waste - seemingly an emblem for the authors’ view of society generally.

In others, greed is the mainspring - The Silent Woman (a conspiracy to murder) and The Broker (trickery in the stock market). In Hard Rain (disillusioned security guard targets millionaire), Dead Cinch (wife-hater authorises her murder) and Good Intentions (young man seeks to protect girl he desires), actions by the protagonists have unforeseen consequences.

Kiss of Santa (department store detective targets an extortionist) by Leena Lehtolainen, is perhaps the odd one out in the collection in having a whimsical note, and an ending not irretrievably depressing. Lehtolainen is the most successful female crime writer in Finland, which may not be entirely unconnected with her more subtle approach.

The biographical notes at the end of the book indicate that many of the writers have previously published work. This is not at all easy to reconcile with the quality of the stories here, which frankly are at times awkwardly phrased and amateurishly nihilist. It’s hard to imagine that readers will feel encouraged to explore further on the basis of what they see here, unless they find Thomas Hobbes’ view of life entirely persuasive.