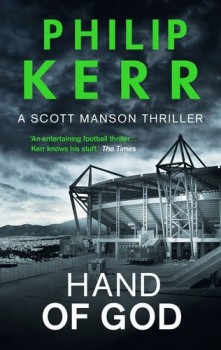 London City’s star striker collapses during a Champions League match in Greece – and manager Scott Manson finds himself investigating in a country that is starting to crumble.

It's not often that you find crime fiction novels starting with a stellar rant. But then Philip Kerr's Hand of God isn't an average crime novel. And its hero Scott Manson isn't an average hero either. He’s a football manager – and a mixed race one at that – who speaks several languages (not just clichés), is well up on classic myths, and seems pretty sound when it comes to Premier League success as well.

January Window, Scott’s first appearance, started with an information dump about the transfer window, before the London City team manager got bumped off. And the lad Scott done good, as he put one over the police by tracking down the killer – something, given his personal history, that gave him a lot of pleasure. And he took over as first-team boss.

Hand of God begins with a refresher course on the team’s cast of thousands, thinly disguised as a rant on the World Cup and the state of the so-called Beautiful Game. And then we’re straight into the action, as a new signing upsets all and sundry, and the London City team find themselves trapped in Greece after their star striker collapses during a Champions League match.

It’s certainly a topical book, given the current situation in Greece, and it also makes you wonder if author Philip Kerr had a bad holiday in Athens at some stage! The book fairly hums with images of a country in a state of collapse, and the very real people doing their best to survive.

Kerr’s passion for football really shines through. He’s ever so keen to tell you everything he knows, so some conversations are verging on a touch too much information – but the action rarely flags as Scott hot-foots it around the area as well as keeping his team focussed on the forthcoming second leg match.

One of the problems with so-called amateur sleuths is that the reader has to be convinced that their investigation is valid and believable. In this case, Kerr nets a winner – this is a football manager determined to do the best for his lads in a country where the police force is struggling badly.

Kerr’s got a nicely gossipy style, and occasionally you wonder who his tame Premier League insider is! There are some nifty one-liners, including the one about Sir Alex Ferguson’s biography – I’m still sniggering at that. But don’t worry if you don’t understand the off-side rule, or haven’t the faintest idea who Fergie is … Kerr’s onto a winner with this series where the highly entertaining international cast are far more important than understanding the game.