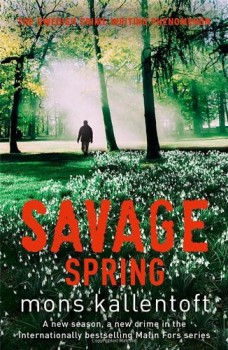 Detective Inspector Malin Fors is called to the devastating scene of a bombing that has killed two little girls. Although still plagued with questions about her past, secrets her mother never revealed and doubts about her own future, Fors must bury her the pain if she is to find the killer before he strikes again.

Linkoping is a small – 100,000 population – town in southern Sweden and once best known as the home of Saab’s aircraft division. Last year it recorded a total of 1,700 crimes of all descriptions. It is also home to Malin Fors, the alcoholic, psychologically unstable, woman DI who listens to the ‘voices of the investigation.’ Kallentoft’s three earlier books featuring this flawed heroine were runaway European bestsellers and the fourth could well join them.

Out of rehab, but still tormented by her personal devils, Malin’s attendance at her mother’s funeral is interrupted by a bomb attack which kills six-year-old twin girls and critically injures their mother. With no clues and all motives open, national security officers join the investigation and their attitude does nothing to endear them to the local detectives. Finally Malin and Zeke, her partner, get a lead which they keep to themselves. It is one that will lead them into danger in an almost parallel universe where unimaginable amounts of money can buy or cover up anything and morals or even sanity are despised baubles to be dispensed with at will.

I’m no lover of the Scandi-crime genre, but Kallentoft is different and I’ve become hooked. Female friends tell me he is probably the best male writer about women – and certainly his heroine, with all her failings, is a very real character, drawn without a shade of sympathy or mawkishness. Her anger – and that of her colleagues – at the slaughter of innocent children is matched only by their disgust at the world of obsessive greed which provides a background to this terrible crime.

As with the winter, autumn and summer cases, this is no lightweight read. Again, Kallentoft’s brilliant and often almost beautiful writing, combined with a deep understanding of human nature and superb characterisation, make it both compelling disturbing. His unique style blends flashbacks with action, deep analysis with the mundane and his trademark technique of using the voices of the victims to prompt Malin’s own intuitiveness is carried off with an absolute assurance so the psychic twist seems perfectly natural in such a dark setting.

Like the earlier books in this year-long saga of greed, brutality and psychological issues arising from desperation which explode in often pointless violence, Savage Spring will leave you shaken. But Kallentoft’s sometimes meditative and poetic style has produced yet another memorable, shocking and at times, very moving, story. With his work translated into 20 languages, he has a legion of fans – and this book will merely reinforce his claim to be the master of the dark school of Scandinavian crime and one of the cleverest and most perceptive authors in the field.