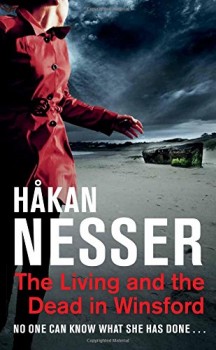 The Living and the Dead in Winsford

Maria Holinek takes advantage of an unforeseen opportunity to rid herself of her husband. Can she hope to escape punishment and carve out a new life?

Socially prominent in their native Sweden, Maria at 55 has faded as a television personality while her husband Martin is a literary academic. The marriage is a cool one – for reasons to do with her personal history, Maria has difficulty establishing close relationships.

Martin has plenty of secrets, including numerous affairs, but Maria seems uninterested in separation. A recent scandal after Martin was accused of rape seems, however, to trigger some wellspring of resentment in his wife, and when during a trip the chance unexpectedly arises to entomb him, Maria seizes the opportunity.

In a mixture of blind panic and cool calculation, Maria makes her way across Europe to Winsford, an isolated village on Exmoor, and rents a cottage. She sends emails maintaining the fiction that she and Martin are living in Morocco, as previously planned, but initially has no hopes other than the wish to outlive her dog, Castor. Gradually, however, she steadies herself, forms a relationship with a local man, and starts to plan an evasion of justice and re-integration into society.

This is a masterful character portrait. Maria comes across as being distanced from normal human feelings, aware that her contact with her children, friends and relatives is somehow lacking, but apparently content with her lot. It is thus all the more shocking when she suddenly takes action, in a way so horrific that the reader’s sympathy should naturally go to Martin, for all his faults.

In fact it is Maria and Castor, taking refuge in a damp cold cottage on a windy moor, who easily hold our interest. The villagers are friendly on the whole, but the harsh environment conjured up is wholly convincing and counterpoints Maria’s anxieties about her dilemma. Her fears are fuelled by an accumulation of signs which suggest Martin may in fact have survived and that he, or an accomplice, is stalking Maria.

Less successful is a sub-plot involving Maria’s exploration of Martin’s research for a book about events in his youth. The dramatic revelations about important (fictional) literary characters generate limited curiosity; even Martin’s participation in an old murder conspiracy is of little interest by the late stage when this becomes fully explained.

Nonetheless, the book remains gripping until the end, largely because of the author’s ability to persuade the reader of the reality of the protagonist, and to care about her fate. Separation or divorce would have been a much easier route to goodbye for hubby, and the steps taken by Maria were strange and full of risk. But for me, this is a credible chain of events, a believable story reinforced with a powerful set of images.