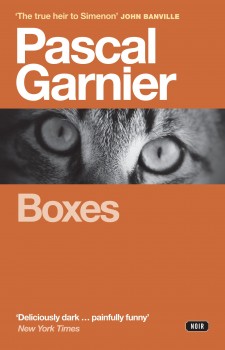 Brice Casadamont moves to the countryside in a move planned by his wife, now absent. As his life falls apart, he spends more and more time with Blanche, a local who also has some problems.

Brice Casadamont is an illustrator in his mid-40s, whose journalist wife Emma has gone missing in a terrorist-related incident. Despite this, he goes through with plans previously formulated by his wife to relocate from urban Lyons to Valence, a rural village. However, on arrival, he finds himself incapable of making much progress with unpacking the pile of boxes brought from their flat, and very soon is living in one room in complete squalor.

By chance he meets local woman Blanche Monteleger, who takes a liking to Brice, possibly because of his slight resemblance to her father, now dead. Blanche is clearly not the full shilling, but in his weakened state, Brice finds her overtures of friendship difficult to resist. Indeed, his isolation is such that he finds her company congenial. But a resurgence of energy which gives him the strength to leave brings disaster.

This is another dark tale from Pascal Garnier, whose psychological portraits are always bleak as well as being frequently funny. The story is told entirely from Brice’s perspective who, like the author, has a morbid turn of mind: the village has expanded from its initial development ‘like secondary tumours’; Blanche’s house ‘stood out dark against the sky like regret.’

The key to Brice seems to be his surprise that he has acquired a wife who is younger and more energetic than himself, and his helplessness at her disappearance. His lack of grip on arrival at Valence is pitiful; he makes an abortive attempt at DIY and leaves a hole in the wall, half-empty boxes, empty food containers and dirty crockery are strewn about, and his personal hygiene suffers. He takes to sleeping in the garage on a camp bed, while most of the house remains empty.

However, it seems his lack of grip is reactive, and towards the end of the story he shows signs of shrugging off his lethargy, re-establishes contact with the agent for the author for whom he illustrates, and actually completes some work to a deadline.

Blanche, however, is a different case. Details of her story given in the last few pages reveal why she is so damaged and vulnerable, and why abandonment by Brice, who she associates with her father, could be so injurious.

The story is told in clear concise prose and although there is plenty of dark matter there are also surreal touches, and moments of real humour. This is quality writing; those who enjoy Highsmith and Simenon, in particular, may find it to their taste.