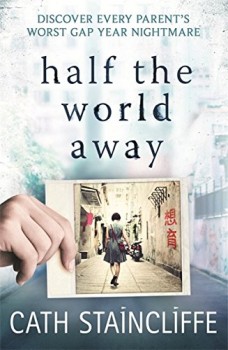 Half The World Away

Graduate Lori Maddox goes travelling and is teaching English in Chengdu when communications home cease. Her parents Joanna and Tom are frustrated by the lack of action in China, and set off to find her.

Joanna is nervous at the idea of her newly-graduated daughter Lori moving as far away as China, but resigned, and she has other problems to keep her occupied: her partner Nick is not coping well with redundancy, and she has two small children at home, one with behavioural problems.

When Lori’s regular blogs, emails and texts suddenly cease, Jo and her ex-husband Tom become concerned, and report her missing. Feedback from the Chengdu police is anodyne and telephone calls from Lori’s friends reveal that the investigation is not being pursued with vigour. The pair decide to fly out and put some pressure on.

The prospects are not favourable - neither speak any Chinese, Chengdu seems very alien, and the authorities offer very limited co-operation. But Lori’s regular texts and photos provide a place to start when Jo and Tom decide to take matters into their own hands. With Lori missing for a month, though, it is difficult to resist the paralysing thought that it is all too late.

Disappearances are distressingly common these days, and everyone is familiar with the tearful press conferences and appeals for information from desperate parents. Staincliffe creates a very believable domestic scenario, beset with familiar types of problems, before the nightmare begins, and the story looked set to become one of helplessness and frustration culminating in the terrible news that every parent dreads.

In fact Staincliffe takes a different direction. Despite the terrible images undermining her mental capacity, Jo shows herself to be absolutely determined and resourceful in following the trail. The story is told exclusively in her voice, and in the present tense, so we are at all times inside her head, and it is only when we stand back that the strength of the woman can be really seen and appreciated.

The steps taken by Jo and Tom as they follow the trail are entirely credible, and the slow revelation of Lori’s last few days before she disappeared is down to painstaking work under the most discouraging circumstances. Jo struggles with physical discomfort, worry about a medical emergency with one of her other children at home, not to mention Tom’s difficulty in suppressing his anger, but remains focussed on what she needs to do, and comes across as admirable as any hero you care to mention.

The story is gripping and what impresses this reader, coming across Staincliffe’s work for the first time, is the understated way in which the protagonist, thrown unwittingly from a domestic situation into a maelstrom, manages against all the odds to contrive the investigative skills and drive to get a result.