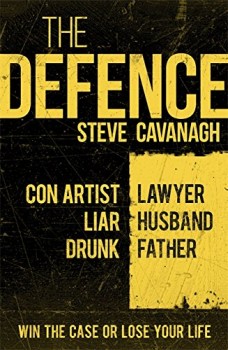 Eddie Flynn is pressed into court to represent a Russian mafia boss, and his young daughter is threatened with death if he does not cooperate.

Lawyer and one-time con-man Eddie Flynn is in trouble when his daughter Amy is taken hostage by Russian mafia boss Volchek, who demands Eddie represent him, and if necessary detonate a bomb in court to kill a hostile witness. Additional encouragement, if required, is provided by the sight of the head of Eddie’s former legal partner in a bag.

Eddie is a slick lawyer and despite zero time to prepare, finds holes in the prosecution case. But as he examines the court material in detail, Eddie realises that Arturas, Volchek’s second-in-command, has a different agenda from that of his boss. With a deadline less than 48 hours away, Eddie needs to find a plan that will enable him to extricate himself and Amy, and keep both Russians and the FBI at bay until his solution can be put into place.

The action in The Defence is fast and furious from the off. Eddie has to work quickly, with very little time, and sections of fast-moving courtroom drama are interwoven with him calling in favours from various friends, and feverishly organising the escape. Luckily, Eddie’s murky background has equipped him with skills for picking pockets and setting up various cons, not to mention knowledge of a 24-hour store for the latest security devices and friendship with an Italian mafia boss.

In addition to the frequent references to the approaching deadline and the ghastly consequences of failure, the excitement is further boosted by some thrilling episodes in which Eddie evades his captors temporarily by balancing on the window ledge of a 14-story building, escapes surveillance by disappearing into the sewers and taking a wild ride on a souped-up motorbike.

Unfortunately, the more wild the action, the more difficult it becomes to suspend disbelief, and the author here pushes the boat out too far. Eddie’s ability to take up the case without notice, the speed that the court case progresses, the oddly flawed nature of the prosecution case, Eddie’s resources and the ease with which he can call them into use, not to mention his unique skills, all seem very far-fetched.

Successful authors like John Grisham spend time developing their characters so that readers can identify even if the circumstances become bizarre, and whether they find lawyers congenial or not. Cavanagh demands too much from the outset, and no amount of later backstory about Eddie’s drifter father, his challenging youth, and his reformation and re-training in the law, is persuasive in establishing him as a person with any likelihood of existing in real life.

The Defence will appeal to those who like escapist novels with an extraordinary protagonist capable of stirring feats of derring-do. Those who need a grounding in reality may find it a bit of a stretch.