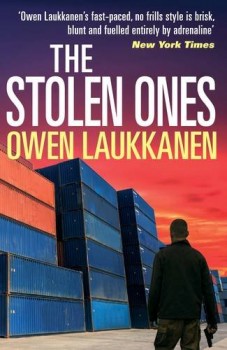 When a sheriff’s deputy is shot, and the girl found over the body speaks no English, Kirk Stevens is nearby and is called in to help.

State Investigator Kirk Stevens is taking a holiday with his family in upstate Minnesota when a deputy is shot nearby. Irina, the girl found over the body, is clearly frightened and speaks no English, and it is only when Stevens’ wife Nancy gains her trust does it become clear that Irina has escaped the clutches of men transporting her, and other girls, for sexual exploitation.

The extra-state nature of the offences enables Stevens to seek the assistance of FBI agent Carla Windermere once again, and soon the pair are hot on the trail to rescue the girls involved and bring down the men responsible. Most at risk is Irina’s sister Catalina, who is still in the container from which Irina escaped, and likely to be targeted by the head of the organisation, The Dragon, an evil man with perverted tastes.

This is the fourth outing for Stevens and Windermere, following previous books where they successfully tackled a kidnap gang, a bank robber and  a murder-for-hire service. The latest is the first with an international dimension, where they face a well-organised system tricking girls from Eastern Europe into containers carried by sea and then by road to a series of low brothels across the US, where they are kept in virtual slavery.

The equivocal relationship between the two protagonists is somewhat less in evidence than in previous adventures. Stevens has worries about his 16-year-old daughter that echoes the concerns about the girls he is seeking to rescue, and will not be tempted into anything to threaten his relationship with Nancy and the children. Windermere has taken her young colleague Mathers to bed, although she is less than impressed when he allows Irina to escape custody.

More space is therefore available for considerable detail about Irina and Catalina’s back story, and the criminal organisation into whose hands they have fallen. This includes Michael, a plausible American in Romania who recruits suitable girls, and Volovoi, a Romanian who started the business and controls day-to-day operations. The Dragon, real name Demetriou, has bought in, takes a big percentage, and is pushing for younger girls who command high prices. Demetriou and Volovoi are in dispute about the direction of the business, and this contributes to the drama in the final stages of the book.

As with earlier books in the series, Laukkanen uses short chapters, detailed plotting and plenty of action moving quickly across various US cities to provide ample excitement. There are raids on the houses where girls are imprisoned, operations against boats on the high seas carrying the containers, and feverish detective work to uncover the whereabouts of Catalina before the Dragon gets his hands on her. It all culminates in a thoroughly satisfactory thrilling and bloody finale.