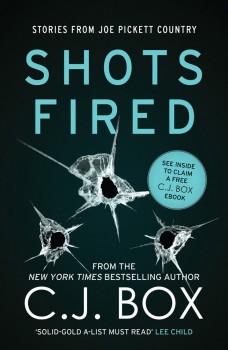 Ten stories from the foothills of the Rockies, home to game warden Joe Pickett, and all featuring some sort of conflict.

Joe Pickett has previously featured in 14 full-length novels, and appears in three of these short stories, all set in the high country of Wyoming or Montana, or featuring residents of the area. Several have Native Americans as key characters. All are stories of conflict, one way or another.

The Joe Pickett stories include that of a ranch-owner who pushes his manager a little too hard (One-car Bridge), the untimely death of an gifted American Indian basketball player (Dull Knife), and the senseless demise of a sheepherder (Shots Fired).

The impact of outsiders is explored in stories of two Czech immigrants seeking a new life (Pirates of Yellowstone), a Saudi Sheik thwarted in his attempt to buy hawks (The Master Falconer) and a man with a grudge against his fishing guide (Every Day is a Good Day on the River).

Also included is a tale set in 1835 of two trappers confined by an early winter (The End of Jim and Ezra), a girl who gains her grandpa’s trust through a shared love of fishing (Blood Knot) and a dispute over livestock moved by air (Pronghorns of the Third Reich). The final story, unique in being set elsewhere, features Lakota Indian Jimmy Two Bulls, who finds his appeal to Frenchwomen in Paris of entirely the wrong sort (Le Sauvage Noble).

With the exception of the latter, the setting of these stories is the wide-open spaces of North Central USA, an environment where even now it is possible to believe that humans have had only peripheral impact. The author clearly has a knowledge and love for the land, and manages to convey the reality with brief telling details, without unnecessary descriptive passages. His characters are also revealed through dialogue and action rather than description, and the easy flow of his narrative makes the whole a pleasure to read.

The reservation lives of the Native Americans is an interesting aspect of several stories. Box is a dispassionate observer, and he illustrates both the strengths and weaknesses arising from their history and ancestry. He is sympathetic to their situation and reserves particular ire for those who would exploit them. But the individuals selected for depiction emerge as complete and interesting characters.

The quality of this collection demonstrates Box’s skills as a storyteller: his economy, his pacing, and ability to create interest have all the hallmarks of a master at work. This volume may be a good appetiser for those unfamiliar with his full-length novels.