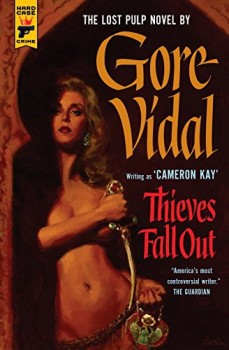 Pete Wells is stranded in Cairo when his money is stolen, and is induced to act as a courier. But he soon realises that he has become mixed up in something very murky.

American ex-soldier, ex-wildcatter Pete Wells washes up in 1950s Cairo, and after a night on absinthe awakes one morning to find he has been robbed of all his funds. His consulate declines to help, but he meets an Englishman, Hastings, who makes him a proposition.

Hastings and his friend, the seductive Helene de Rastignac, offer generous pay if Wells agrees make a trip to Luxor on an errand. No further details are given. Pete is warned by others that the task could expose him to danger, but he agrees to go. On arrival in Luxor he meets Anna Mueller, a beautiful blonde who is said to be of interest to King Farouk, and for that reason hazardous for anyone else to approach.

Pete and Anna talk and before long both are smitten, although Anna is mixed up in something she is unwilling to talk about. Pete is ready to carry Anna back to wedded bliss in the States, if he can only persuade her to abandon what she is involved in, and manipulate the circumstances to generate some income to get them home.

This book is of interest, if only because of the literary fame the author later achieved. It is not even acknowledged in most biographies, and was no doubt dashed off for a modest fee, and printed in a cheap paper edition. It may justly, therefore, be described as ‘pulp’ in one sense, although the graphic violence and sex scenes characteristic of the genre are here only in a very watered-down version.

The hero Pete is the quintessential clean-cut American; Brits are given qualified acceptance although stuffy and red-faced; foreigners are generally suspect, and Egyptians are greasy and menacing: a little reminiscent of Biggles. Pete stands out as the only truly virile character, full of the right stuff. He is also wholly male: no hint of the mutability of the gender role, explored in Vidal’s later works, emerges here.

The Egypt depicted in the book gives every appearance of being based on a viewing of the film Casablanca and a cursory reading of Baedeker’s Guide. The characters too lack much substance. It is only the dialogue that gives any hint of quality, for its time punchy and direct, with occasional hints of Philip Marlowe.

The book ends with political turmoil in the city and an attempted coup against Farouk. Farouk’s position was precarious after Egypt’s failure in the 1948 war with Israel, and he was forced to abdicate a few years later, with CIA assistance. It is fertile ground for fiction, but unfortunately Thieves Fall Out sticks resolutely to the narrow confines of its plot.