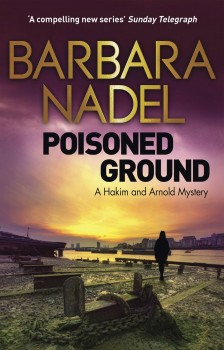 PI Mumtaz Hakim goes undercover in a psychiatric institution seeking evidence that a doctor has manufactured evidence to cover up his crimes.

Lee Arnold runs a detective agency in London's East End. Mumtaz Hakim, his sole colleague, is hired by Salwa, a Muslim woman whose husband has been arrested when a bomb was found in his locker at the mental hospital where he works as a nurse.

Mumtaz goes undercover as an advocate for service users who, it is rumoured, were being abused by the doctor who called in police. While it soon becomes clear that all is not right at the hospital, Salwa has secrets, including a lock-up garage which her husband has filled with something he is keeping very quiet about.

Meanwhile, Lee has a case of his own, trying to track down Phil Rivers, who has fraudulently sold a house owned by his ex-wife for a large sum. His enquiries take him down to Southend, where he finds Phil's father dropping thousands of pounds at a casino several times a week. Lee is staying with Susan, a croupier at the casino, but having trouble coping with this new girlfriend's possessive nature.

There is plenty going on in this book, with several intersecting plot lines and a large cast of characters. Readers of previous books in the series will be aware of the problems Mumtaz has arising from her (now dead) husband's gambling debts and the criminal gang who are still demanding payback, and difficulty protecting her step-daughter from threat.

Lee's personal life is also complicated; he is concerned about an old partner who is in hospital for a thyroid operation but any contact upsets Susan, and he is sharing his flat with a friend who is down on his luck and too much of a slob for the neat and tidy Lee.

Life at the hospital infiltrated by Mumatz is problematic. Patients are being routinely mistreated, deprived of medication and in some cases sexually assaulted. They are also intimidated from making complaints, and attempts by Shirley, head of advocacy, to do something about the situation are rebuffed by the doctors. Salwa is keen for early progress, but her home is in turmoil: she plans to take her daughters to Egypt, one for an early marriage, and one for circumcision, and the eldest Rashida is fighting it.

The protagonists in this densely-plotted book put themselves at risk and suffer the consequences. Lee suffers three serious assaults and Mumtaz is left alive only to permit the villains to explain their modus operandi, much as one is accustomed to in Bond films. It is difficult to avoid the temptation to write off the whole cast as a bunch of losers: everyone seems to make a meal of their problems, with a frustrating tendency to move in precisely the wrong direction to find solutions.

So while events in the psychiatric hospital and at the home of Salwa seem not entirely unlikely, it is difficult to suspend disbelief entirely. It is hard to believe that the buyer’s solicitor would not have carried out even the most basic of checks on the seller’s solicitor. The Law Society has a procedure for such verification for exactly this reason, and either the buyer’s solicitor – or the author – can reasonably be held to be negligent in this detail. In similar vein, the long-disused term WPC is used, and at one point we are told Mumtaz has to use her old (only remaining) handbag. Whoever heard of a woman with only two handbags?