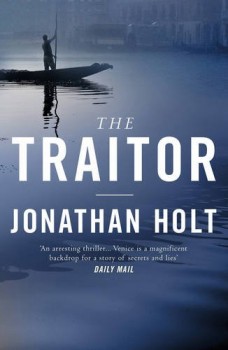 The discovery of a banker on a popular Venice beach, his throat cut and tongue removed, kicks off an investigation with international ramifications.

This is the third book in the Carnivia Trilogy set in Venice, featuring local police Captain Kat Tropo and US Second Lieutenant Holly Boland. Between them the two uncover deeply hidden right-wing political machinations going back 50 years, and a contemporary plot funded by the same elements that threatens Western civilisation.

Tropo is assigned as investigating officer when a man is found dead, dressed with a strange mask and other items characteristic of Masonic membership. He is soon identified as a leading player in a private bank who has been heavily investing in unorthodox financial instruments, actions which only seem to make sense if a major political upheaval is likely.

A second plot line follows Boland, who comes across some intriguing documents in the possession of her father, who has recently suffered a stroke. She finds that for a time in the 1960s and 1970s he had access to communications relating to CIA operations in Italy, and comes to suspect that his stroke was artificially induced to guarantee his silence. Boland sets off for Italy to investigate.

And a third features Daniele Barbo, a computer genius who created Carnivia, a website which enables users to communicate using avatars in perfect security. Barbo is preparing to terminate his association with the site but becomes aware that someone is using the cloaking it offers to conceal a devastating attack, exploiting the vulnerabilities inherent in the Internet of Things.

The CIA, Masons, Italian politics, and computers are all rich fields for conspiracy theorists, and much of this thriller could be casually dismissed as far-fetched fantasy if it weren’t that the author adds a postscript showing that much of his plot has a solid grounding in fact. Those who have much experience in collective endeavours may be inclined to regard major schemes, beneficial or otherwise, as almost inevitably bound to founder on incompetence at some stage, but the plausibility of the background here does give pause for thought.

Holt keeps the action going with brief chapters shuttling between the key actors in the drama. Tropo is pushed out of the line of investigation when she threatens to uncover more than was expected, but perseveres. Boland chases records concealed by her father in Italy, with ruthless hostiles close on her tail. An Islamic terrorist with advanced computer skills rehearses the techniques which threatens catastrophic disruption to life, and Barbo seeks psychological intervention which will free his mind to counter the menace. The elements are drawn together with a suitably thrilling finale.

The author was apparently inspired by a visit to Venice, and it certainly makes for an interesting setting, especially when Holt gives us a taste of the real city hidden under the tourist hype.