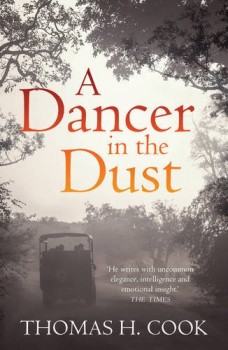 A Dancer in the Dust

When a friend is found dead in a New York back street, Ray Campbell feels obliged to return to the African state of Lubanda and to confront a past he would prefer to forget.

It was customary at one time to assign crime fiction to the realm of ‘popular art’, designed for the uneducated and the unsophisticated, and it was not until the second part of the 20th century that this view changed. Then it began to be seen that the accepted distinction between ‘non-serious’ and ‘serious’ literature could not always be maintained. A Dancer in the Dust is a novel that belongs to both classes simultaneously and it soon becomes obvious that it has a claim to be regarded as a legitimate work of art. A crime does take place, but, whilst the reader is concerned to find out who committed it and why, it is used mainly as a means of exploring the main themes of the novel.

Twenty years ago Ray Campbell, recently graduated from university, is an extremely enthusiastic and idealistic aid worker in the newly independent African country of Lubanda. There he meets Martine, a local farmer, proud of her Lubandan heritage, and completely at ease in her simple life. Ray instantly falls in love with her and has plans to persuade her to accompany him on his return to the United States – plans which he doesn’t actually mention to her because he begins to see that she is determined never to leave Luanda.

It becomes obvious, however, that if she stays she is not going to be allowed to follow her simple life as a subsistence farmer. Whilst President Dasai’s motives in aiming for what he called ‘Village Harmony’ are honourable enough, they have not been thought through. They include the growing of crops not for local consumption but for the commercial profit of foreign companies and when Martine is ordered to convert her farm into a coffee plantation she refuses point-blank to do so, thereby antagonising government bureaucracy and putting herself in danger. Ray, of course, is determined to do everything he can to help her, though he becomes more than a little annoyed when she appears obstinately reluctant to help herself. It is this incident and its consequences – referred to obliquely as ‘the incident on the Tumasi road’ – around which the plot revolves.

That plot, however, is by no means all of the novel and could be regarded as not even the heart of it. The older Ray Campbell begins to understand the nature of his idealism as a young man. At that time it seemed that things had to be done to bring help to African nations struggling with the responsibilities of independence. His personal project had been to dig a well near the village of Tumasi and it comes as a surprise to him when Martine points out the consequences of such a change to the local environment. We begin to see and to sympathise with her view that such innovation, although introduced with the best of intentions, can do more to disrupt than to advance the lives of ordinary African people. Never for a moment, however, does this become a theoretical and consequently dry philosophical discussion.  Instead it arises naturally and almost inevitably from the events and their consequences.

Equally – if not more – important to the novel is the sense of loss and regret felt by Campbell when he looks back 20 years later on that brief period in Africa. This, of course, is something with which we are all familiar as we grow older – the chance we had to behave differently, to be more understanding and, where required, more courageous. He had told himself that he had acted from the best of motives but now he is not even certain of that. It is this personal aspect that comes over most strongly and which gives the novel its emotional depth.

In essence there are only two characters portrayed in any depth – Martine and Campbell. The novel is concerned with the interaction between them. If it is a love story it is one – like that of Romeo and Juliet – almost entirely subject to and controlled by external factors. Like another character in literature, Campbell does look back in anger, but it is an anger directed mainly at himself as he considers whether he might not have been guilty of betrayal.