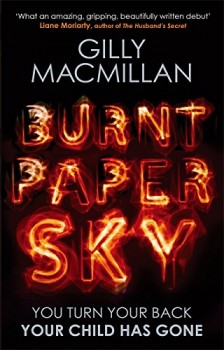 Allowing her eight-year-old son a few moments of freedom in the woods leads to every mother’s nightmare when Rachel Finch’s son disappears, presumed abducted.

Rachel Finch is enjoying an afternoon walk in Leigh Woods near Bristol with her eight-year-old son Ben and their pet dog. Ben wants to run on ahead to the swings and Rachel lets him, a decision she soon regrets when both Ben and the dog vanish and, despite an extensive search, are nowhere to be found.

The press and the general public are all over the case – and Rachel – like a rash, soon presenting her as something more sinister than just a distraught mother who made a decision that millions of others make every day without thinking of such dire consequences, to allow her child a few moments of freedom. Rachel soon starts to crumble under the relentless social media spotlight, and the tide of public opinion soon turns against her.

Rachel narrates her own side of the story, interwoven with sections also in the first person from DI James Clemo of the Avon and Somerset Constabulary, who is leading the hunt for the missing boy. There are also transcripts from psychotherapy sessions between Clemo and Dr Francesca Manelli, being held a year after the disappearance, where his own words are interspersed with her observations on his state of mind, and its clear at the outset that the disappearance on Ben Finch made a profound impression on a career police officer who’d followed his own father into the force and worked his way up from the bottom.

The three narrative strands push the story on at rapid pace, and I was soon sucked into Rachel’s mauling at the hands of the press and various bloggers, one of who soon starts to hold Rachel responsible for what happens and, more worryingly, seems to be being fed information known only to insiders.

Bunt Paper Sky is undeniably a strong debut, but I was very nearly bounced out of the story in the early stages when Gilly Macmillan started describing women police officers as WPCs, an anachronism that still dogs both new and experienced writers alike. This particular pitfall really should be ruthlessly eradicated from anything other than period-appropriate crime fiction!

That aside, there’s something wholly compelling about the portrayal of the steady deterioration of Rachel’s mental state as she’s ripped apart on a daily basis both in the press and on the all-pervading internet. Equally compulsive is Clemo’s determination to do his best for a little boy he’s never met. I also enjoyed the strong sense of place that came from the almost lyrical descriptions of my home city.

With the cases of both Madeleine McCann and Ben Needham still fresh in mind, it was hard not to draw parallels with how their parents have been treated online and in print, and against that background, Macmillan succeeds in delivering a thought-provoking look inside the minds of the distraught parents, the dogged persistence of the police and the mob-mentality all too often found on social media platforms.

Macmillan plays her cards close to her chest as the story progresses, skilfully maintaining the suspense to a late stage. I found my sympathies shifting around like the mud in the River Avon on a turning tide, sucked first one way then another. Burnt Paper Sky will force you to examine your own prejudices as the story unfolds, and will almost certainly make you a little less quick to judge what you see online and in the media.