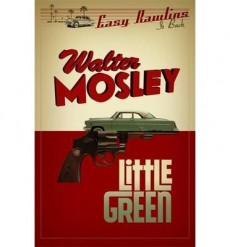 Easy Rawlins, a black PI in 1967 LA, emerges from a coma to find his friend Mouse seeking help to save a young member of their community.

Easy Rawlins is black, a veteran of World War II and a graduate of the school of hard knocks, working as a PI in 1967 Los Angeles. He wakes from a coma induced by a botched suicide attempt to find his friend Mouse by his bed, seeking help to find a young man who has gone missing. He is motivated but very weak, and it takes a visit to Mama Jo’s to fix him up with some country medicine before he is able to get down to work.

The missing man, the eponymous ‘Little Green’ was last seen in the company of a hippie girl, and Easy starts his investigations where the hippies hang out. It turns out that Green has unwittingly become involved in a drug-related killing, and Easy is going to have to play a cool hand to ensure that Green and his family will survive the murderous intentions of some ruthless people.

Little Green is the 12th Easy Rawlins novel and enthusiasts will be familiar with his world. Easy is part of a minority black community with its own distinct beliefs and ways of living. He understands that the USA’s institutions and attitudes are framed for whites, and that persons from minority groups are vulnerable to prejudice and persecution, especially around  the edges of the law where Easy operates. In such a hostile external environment, Easy stays close to his tribe. He values loyalty and friendship, and does what he can to promote family cohesion in a milieu where stability is rare. Despite several beatings and killings in the book, Rawlins has a strong moral code.

All this is mere background, however. Rawlins doesn’t let the grass grow under his feet, and the action is unrelenting. After a two-month coma and still feeling barely alive, Rawlins immediately plunges into motion, seeing off a squatter in his temporarily-vacated apartment, trawling the hippie quarter for information, and rescuing Green from his captors, while fending off unfriendly cops and a wide variety of criminal low-life.

Easy Rawlins, it has to be said, is magnificently larger than life, and considered soberly the book does have something of a cartoon feel about it. Mosley’s depiction of black society is less convincing than that of, say, George Pelecanos, and for all his experience the ease with which Rawlins manages to manoeuvre himself through the frequent scenes of extreme violence is a little too slick. But with a large and interesting cast of characters, and roller-coaster action, Little Green is quite a rush.