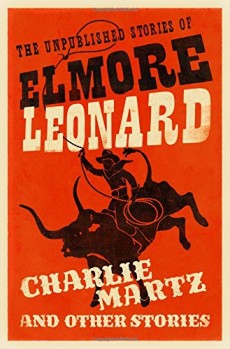 Charlie Martz and Other Stories

Fifteen previously unpublished early stories from the cult writer illustrate the development of the skills that became so evident in his later books.

Elmore Leonard died in 2013, leaving behind 45 novels, and a cult following. Several of his books were made into successful films, Jackie Brown, Get Shorty, and Mr Majestyk amongst them. If you haven’t yet got around to reading his stuff, you have a treat in store.

Collections of early work, especially stuff that the author didn’t see fit to publish during his lifetime, can be a dubious proposition. Few writers find their metier without practice, and their first efforts are not necessarily worth reading. The stories in this volume are certainly not as polished as Leonard’s later work. However, they show signs of the qualities that brought him fame, and early traces of themes later developed in full-length works.

The title story is one of four set in the Old West, like much of Leonard’s early work, and these are to my mind the least successful in the collection. The re-animation of a Confederate widow (Rebel on the Run), and the face-off between a bullfighter and a bullying ranch owner (The Bull Ring at Blisston) are more interesting and encapsulate the theme of resilience and spirit which animate his better Western stories.

A good deal of humour comes through in tales set abroad: a communist in Malaya foiled by the chance action of a British officer keen to arrange a badminton contest (Time of Terror), an American actor in Spain dogged by bad luck (The Only Good Syrian) and particularly in a sarcastic look at Americans away from home (A Happy, Lighthearted People).

The above suggest a writer tackling a range of settings and ideas to hone his skills, and this continues within another four stories: a gangster tale (One, Horizontal), seduction in Arizona (Evenings Away From Home), a salesman who gives a schoolgirl a lift and gets robbed (Arma Virumque Cano) and an intimate exploration of young couple in dispute (The Italian Cut).

My favourites in the book are the tale of a young husband challenged by his wife’s old boyfriend (For Something to Do) and another same who has to deal with illegal hunters on his land (The Trespassers). In both, the protagonist is faced with a hazardous and frightening situation, but deals with it by clear thinking and cool. These are early versions of the most successful of his characters in his full-length books.

In an introduction, Peter Leonard, Elmore’s son and also a writer, says that the reader can see Leonard experimenting with style to find his voice, and breaking several of the 10 Rules of Writing he published almost 50 years later. It might not be the first Elmore Leonard you’ll want on your shelf, but it still has a lot to offer.