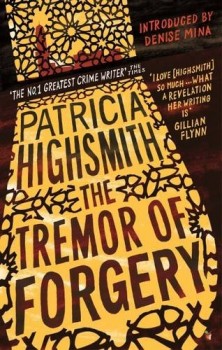 The Tremor of Forgery

Stranded in a small Tunisian town, American writer Ingham takes violent action against an attempted burglar, but finds himself curiously indifferent to the outcome.

Ingham is in Tunisia waiting for Castlewood, with whom he was to write a film script. When Castlewood fails to arrive, and he receives no mail from Castlewood or his girlfriend Ina, Ingham begins to feel rather adrift. He starts a novel, and meets Adams, a conventional and rather preachy American he names OWL (Our Way of Life), and Jensen, a gay freethinking Dane.

His sense of anomie grows when he receives word that Castlewood has killed himself in Ingham’s New York flat, after a brief fling with and then rejection by Ina. He is also somewhat disconcerted by local events: he stumbles over a dead body in the street one night, and he is the victim of two petty thefts.

Then he is awoken at night by an intruder at his hotel bungalow, possibly by the man who robbed him before. He hurls his typewriter and  the burglar falls back through the door, injured or dead. Ingham hears hotel staff remove the body, and from then on the man is not seen again. OWL suspects the truth and presses Ingham to confess, as does Ina when she arrives and OWL tells her of his suspicions, but Ingham feels little remorse - his moral sense has been dramatically affected by his experiences over a few short months.

First published in 1969, this is another of the Highsmith oeuvre now reissued in paperback, and it remains as interesting as it was 45 years ago. A certain emphasis on ceremony at mealtimes and politeness betrays its time and class, and compared with most contemporary crime fiction the plot unfolds slowly and there is little action. It will, however, definitely appeal to those who find psychological studies to their liking.

The forensic examination of Ingham’s mental state is echoed by the book he is writing, a story of a Dennison, a banker who systematically robs his employer to give to deserving others. The tremor by which a forger reveals himself explains the title. Ingham explains to Ina that the book explores “whether a person makes his own personality and his own standards from within himself, or whether he and the standards are the creation of the society around him.”

The feelings of the protagonist are revealed partly through his daily interactions with the only two Western characters in his ambit: OWL, with his conformist parroting of middle-American views, and Jensen, an artist who lives in a cheap tenement, credits locals with little worth, and feels that Ingham has nothing to apologise for. Although Ingham is pulled in both directions, his decision to join Jensen in his tenement, and his reaction to Ina when they meet, seems to suggest Highsmith’s answer to the question she poses.