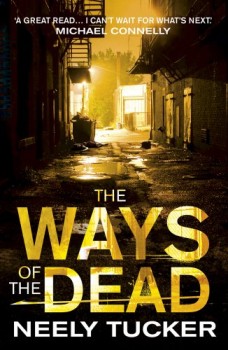 The Ways of the Dead

The daughter of a judge is found with her throat cut. Is it a random crime, a revenge attack on her father, or the work of a serial killer?

Washington crime reporter Sully Carter gets word that the body of Sarah Reese, daughter of a judge, has been found in a dumpster. The police are looking for three black youths seen with the girl shortly before she was killed, and to many the crime is all but solved.

Sully, however, is not so sure; his cynical turn of mind rejects such an easy solution.  He finds a concentration of deaths of young women in the same location, and disappearances not even investigated by the police as suspicious. One of these missing girls turns up dead, and several witnesses identify Judge Reese as having had an affair with her. Sully is determined to find the truth.

This is a terrific first novel by a man with a long career in journalism. Reporters are not always a species easy to like, but Sully is something special. He has a history of war reportage which has left him both physically and emotionally damaged, but despite his problems, including use of alcohol, he maintains a cool exterior, he is sympathetic to others and distains the fervour for sensationalism that often characterises the tribe.

The background is compellingly depicted and entirely convincing: the run-down townhouses and struggling society of the poorer parts of the city, the newsroom with its routines and arguments over editorial direction, and police procedures and pre-occupations.

Within this framework Sully becomes in effect the key investigator. The police and other crime agencies are focussed on the most obvious solution and have no resources to spare elsewhere. Their systems for monitoring crime are so bureaucratic that indicative patterns are overlooked, and only Sully has the drive and flexibility to expose what is really happening.

The book is all action throughout, with minimal backstory into Sully’s harrowing experiences in various theatres of war, and past conflict with Judge Reese which nearly finished his career. Sully is driven forward by pressure from his editors to beat the opposition, by his feeling that without new facts the justice system could become tied in to dubious ‘solution’ to the case, and his suspicion that there is a killer still out there waiting to be caught.

Sully, like any effective reporter, has plenty of useful contacts to get more information, including those in the police and judiciary, and Sly Hastings, a man familiar with the darker side of happenings in the neighbourhood. Asking questions, crosschecking, always pushing for more, Sully eventually uncovers criminal activity well beyond anything previously imagined. The tale builds to a dramatic conclusion, with a final unexpected and terrible twist in the tail.