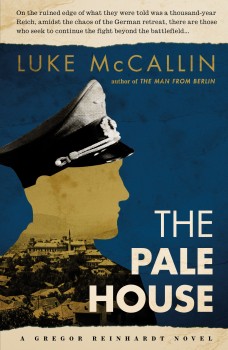 During the German retreat through Yugoslavia in 1944, Captain Gregor Reinhardt comes across a site of mass murder. His enquiries expose a conspiracy involving both the brutal Ustase and senior figures in the military hierarchy.

Captain Gregor Reinhardt’s first outing in The Man From Berlin saw him in Sarajevo in 1943; he now returns to that city in 1944 with the Axis powers in retreat. The Ustase, local collaborators, well aware that their position will soon be untenable, are rapacious and undisciplined, and their German masters have no interest in imposing restraint.

On his way into the city, Reinhardt comes across an execution site, with bodies of peasant refugees, urbanites and, strangest of all, burnt corpses in German uniforms. As a captain in the Feldjaegerkorps (military police) Reinhardt has wide powers of investigation, but with hostility from both other military elements and the Ustase, and partisan forces likely to force evacuation of the city within a matter of days, getting results will not be easy.

Reinhardt comes across as a sympathetic character despite his role as a cog in the Nazi machine. A veteran of World War I, he spent the inter-war years as a policemen in Berlin and was reluctantly forced back to war. He formed contact with others who oppose Hitler, and agonises about their failure to achieve practical results. Even within a theatre of war where killing is pervasive, he is committed to the elimination of illegality, and has a strong distaste for the misuse of power.

Soon after Reinhardt’s arrival in Sarajevo, three of his colleagues are killed in a shoot-out, and in a house nearby are found bodies dressed in ill-fitting civilian clothes. His investigation meets resistance in particular from Jansky, a senior figure in a field punishment battalion, but also from the criminal justice staff of the Garrison. To get results Reinhardt has to push his contacts from all sides of the conflict, and expose himself to great danger.

This is a fast-moving story, full of confrontation and incident. The setting, a city under great stress approaching the conclusion to years under foreign occupation, is entirely convincing. Particularly impressive is the familiarity with the many and various units of the military structure; for those who find themselves at sea, a chart of ranks and a cast of characters is included for guidance.

The authority with which McCallin moves these elements around gives the reader great confidence in the authenticity of the story, and for most of the time the progress of his protagonist too feels realistic. Towards the end Reinhardt does seem to elicit a surprising amount of trust from groups in the city who one would expect to be very wary, but with this minor exception the tale creates an utterly credible picture of a place and time, and a complex, exceptional character in action.