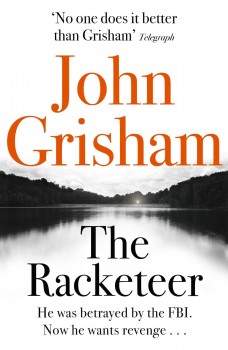 Lawyer Malcolm Bannister is serving a ten year sentence after being railroaded by the FBI for a crime he did not commit. When a Federal judge and his lover are murdered and the investigation stalls, Bannister tells the agency he knows the killer – and launches a brilliantly conceived plot to gain revenge.

When a Federal judge and his lover are found shot to death in his backwoods retreat, the FBI faces an insoluble case and with no witnesses and no clues, despite mounting political pressure, the trail goes cold. This is the chance Malcolm Bannister has waited for and he tells them he knows who committed the murders. His price for the killer’s name is his freedom, a new identity, a place in the witness protection programme – and the reward money on offer.

This is no great courtroom drama, more a devious tale of revenge. Malcolm Bannister, a none too successful black lawyer, has lost everything – his family, his profession and his freedom and is serving a ten-year sentence for racketeering for his innocent involvement on the fringe of a money-laundering ring. Prison hones his legal skills as he advises other inmates and sparks a brilliantly conceived plot to take revenge on the FBI who, he believes, railroaded him for little other reason than to make conviction figures look better.

Is John Grisham, dare I say this about a writer with millions of fans worldwide, becoming a little complacent? For all its undoubted ingenuity this reads more like a draft proposal for a film script than a novel. With plans already well advanced in that direction – and doubtless Hollywood’s best black actors fighting for what is bound to be a box office smash lead role – the book looks suspiciously like a mere add-on to exploit the earning power of his name.

Indeed, Grisham comes close to admitting as much in his author’s notes, saying that research was ‘hardly a priority’ and accuracy ‘not deemed crucial.’ That attitude has spilled over into his writing. Characterisation is weak – we know very little more about his protagonist at the end than we did at the start and his girlfriend, who plays a crucial part in what is essentially a tale of the greatest con in American history, is presented almost entirely as having big breasts and superb legs! The rest of the characters are little more than walk-ons, their often inconsequential roles mainly to pad out the plot and action. Far too much is left unexplained.

All Grisham’s usual themes – the small man taking on the big battalions, and his thought-provoking dissection of the anomalies of the American judicial system – feature in what is an intriguing mystery tale with some clever, but often predictable plot twists. It starts well enough, sags somewhat in the middle and splutters towards a fairly abrupt ending.

Had the characters been more developed, the pace stepped up and the story closed out more effectively this could have been another triumph. As it stands it’s a smart, light and entertaining holiday read, which for a writer of his ability is a bit of a let-down. I’m looking forward to the film, though – given the plot and some spectacular settings that really should be something!