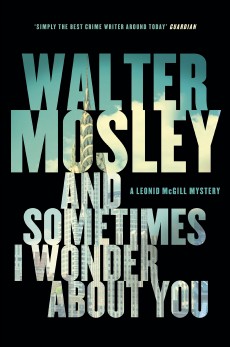 And Sometimes I Wonder About You

PI Leonid McGill comes to the aid of the beautiful Marella on a train, who proves to be suitably grateful. Meanwhile, he receives plenty of other new calls on his services.

Fifty-something Leonid McGill is an ex-boxer with a small New York detective agency comprising himself, son Twill, and his office manager Mardi. McGill receives a visit from Hiram Stent, who is seeking help in finding a relative who is said to have come into an inheritance. McGill refuses the case, but when shortly afterwards his office is broken into and Stent is killed, he decides to investigate on behalf of his dead would-be client.

Twill is proving elusive, but eventually is located pursuing a case on his own, on behalf of a girl whose boyfriend claims to be under threat from a major criminal organisation. The head, known as Jones, has suborned hundreds of children who thieve at his direction, kept in line by threats of violence.

This is the fifth Leonid McGill mystery, and those who have met the man before will find the protagonist, his family and friends already familiar: Gordo, McGill’s surrogate father who runs a gym for boxers, Hush, a government hit-man trying to stay retired, computer whiz-kid Bug, and Zephyra, some kind of fixer, amongst others. McGill’s wife is recovering from a suicide attempt, aided by McGill’s absentee father Clarence who has belatedly shown up, seeking to make amends.

As with Mosley’s other character in his own series, Easy Rawlins, McGill is black and brings a certain sensibility to his life. A somewhat relaxed attitude to marriage and relationships, greater familiarity with persecution and violence, and a more ambivalent attitude to the forces of law, perhaps, but at the same time a solid sense of care and loyalty for those lucky enough to be included in his close circle, a kind of extended family.

The above provides plenty to like about McGill, and the occasional reminder about the different standards applied to those with a dark skin colour also makes him sympathetic. As a role model, there are plenty of worse American heroes. It is only that for a man in his late 50s, his performance in rumbles, and in the bedroom, strikes one as a little too impressive to be entirely credible. A grossly oversized office in mid-town Manhattan also raises questions about funding.

For me, plausibility stretched to breaking point with the revelation that Jones keeps tabs on the 600+ kids he runs by means of transmitters installed surgically in the back of the knee. These supposedly send a signal to enable Jones (and presumably a team of monitors and analysts working 24/7) to be aware of the whereabouts of each so he can punish unauthorised deviations from instructions. Battery change day must be a nightmare.