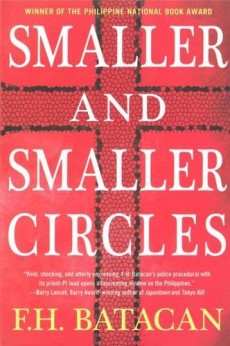 The poor who scavenge the Payatas dump in Manila don’t rate very highly with law enforcement, so when the eviscerated bodies of boys begin to be found it is a while before anyone sees a pattern.

Scavenging the 50-acre Payatas dump on the outskirts of Quezon City is the way some of the poorest in Manila scrape a living. When young teenagers are found dead on the dump, lack of proper recording means that the implications are overlooked. The police lack resources and more glamorous crimes get preference.

Eventually, one of the dead is brought to forensic anthropologist Gus Saenz for an autopsy, who understands that the mutilation of the deceased has meaning. Discreet enquiries of various police authorities find previous victims similarly defaced, all of whom were killed on the first Saturday of each month. Saenz and fellow priest Jerome Lucero, clinical psychologist, begin the hunt for the killer.

This is widely regarded as the first Philippine crime novel, initially published in 2002, only one of several reasons for finding it of interest. It is unusual to find priests with high levels of technical qualification and experience operating in this field, for one thing. The two priests’ religious beliefs do not feature largely in the story; in fact, they come across as remarkably free of cant.

Saenz and Lucero are moral in the best sense of the word, seeking to understand and relieve the killer of his burden as much as to prevent further deaths. As the book opens, Saenz is angry with the way in which the Catholic church has frustrated his attempts to expose a senior cleric who is using a charitable institution to provide him with opportunities for child abuse, a theme which proves to have resonances with the main plot.

Perhaps more shocking to Western perceptions are the deficiencies in law enforcement. Statistics on missing persons are not compiled systematically or transmitted to a centralised authority for recording and analysis. In individual cases, relatives are advised to appeal in the media for help and police enquiries rarely go much further. It is thought that incompetence or willful massaging of the statistics lead to widespread misreporting or underreporting.

Underlying this failure of the judicial authorities is widespread corruption and huge disparities of wealth, characteristics of the country seemingly impervious to change. And the condition of the poorest is difficult to comprehend: thousands of people, particularly children, whose only means of sustenance is the gleanings from a fetid pile of filth.

Exposure of these obscenities can only be a good thing, and they certainly make the basis of an interesting story. The protagonists are engaging characters; their progress is rapid and the author adds some bureaucratic complications to slow them down, perhaps the least convincing aspect to the plot. Overall, though, Smaller and Smaller Circles is worth reading, if only to get a taste of problems very different from those faced by crime-fighters in the West.